Multiple sclerosis: "With my family history, my diagnosis only took a few hours!"

Coline was diagnosed with multiple sclerosis 4 years ago. She went to the clinic because of diplopia, also known as double vision. Her brother also has MS, so the diagnosis was quickly made and she was able to put a name to her symptoms. An illustrator by trade, she decided to share her experience of multiple sclerosis on social media. She shares her testimonial on Carenity!

Discover her story below!

Hello Coline, thank you for agreeing to share your story with us on Carenity!

Hi, I am 37 years old and have multiple sclerosis as well as chronic migraine. I'm a children's book illustrator and I also have an Instagram account called Sclero and Me where I draw about my MS story. I don't talk about my migraines yet, but I think that will come.

I've been in a relationship for 17 years, I have 2 cats that I love beyond measure. I like to laugh and make people laugh, I like to sing and play the ukulele. I play Animal Crossing, I read a lot, especially thrillers, but also books on psychology or sociology. I listen to a lot of podcasts, I watch a lot of popular science videos, and many, many series. All in all, I have the hobbies of a home-loving groundhog, but I also like cycling, picnics and drinks on the terrace! 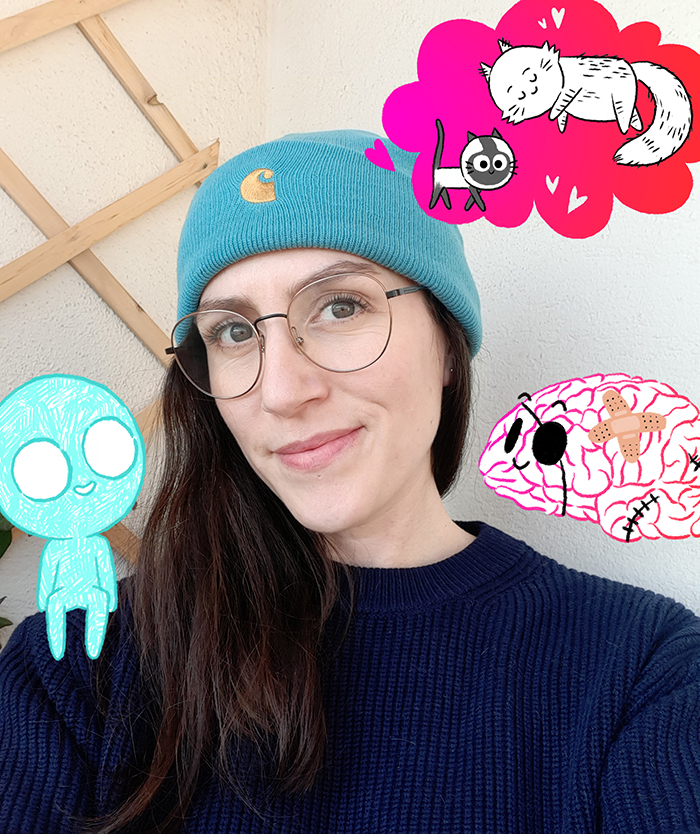 You have multiple sclerosis. When did your first symptoms appear and what were they?

My first 'official' symptom appeared a little before I was 33. It was diplopia, i.e. double vision. I say "official" because it is possible that mild symptoms for which I had not consulted a few years before were, in fact, the very first signs of the disease.

What made you seek a doctor for multiple sclerosis? What tests did you undergo to get the diagnosis? How many doctors did you see?

I realized I had a vision problem on a Friday night and, as it was still there the next morning, I phoned a weekend duty doctor. After telling me that it was probably nothing, the person on the other end of the line finally referred me to the emergency room and said that it might, in fact, be neurological.

I had obviously already done some research on the internet and I knew that it was possible that it was multiple sclerosis. The likelihood was even greater because one of my brothers had been diagnosed with MS himself two and a half years before.

Given this family history, my diagnosis took only a few hours. A clinical examination and a brain MRI were enough to confirm what I feared.

I saw relatively few doctors during my time in the emergency room. They were two interns, one of whom was in neurology.

I was then admitted to hospital and had a spinal tap (just to be sure!) and doses of corticosteroids. It was during this hospitalization that I met the neurologist who is currently treating me.

How did you feel when you got the news? Were you expecting it? Had you heard of multiple sclerosis beforehand?

As I said, I was expecting the diagnosis, but it was still a punch in the gut. In my misfortune, I was "lucky" to know about this disease because, as I said earlier, my brother had it before me. So I knew that there were treatments, that it was not a fatal disease, that severe disability were not inevitable.

But I was still very sad to think about what my life could have been like. I was also very sad for my parents who were left with two of their children with an uncertain and frightening disease.

I know that this is often the case with other patients, but I did not feel angry or that it was unfair. Not that I thought I deserved this disease, but it was obvious to me that it was just bad luck. To put it in a trite way: "That's life!" I think that this way of thinking helped me to accept my MS quickly.

What care are you currently receiving? Are you satisfied with it? What do you think of the medical or psychological support you received?

I receive care at the Toulouse University Hospital. I go every 6 weeks to spend a few hours in the day hospital for my basic treatment, administered by infusion. I'm not always happy to go there, but this regular appointment suits me and gives me the feeling that I'm being followed closely by the neurology team.

My treating neurologist, who also follows me for my migraines, is very available and very attentive. I consider myself to be well looked after since my first hospitalization at the university hospital. I changed my family doctor a little over a year ago to find someone with whom I had a better feeling, an excellent decision!

I am much less hesitant about consulting a doctor than I was before.

How often do you have flare-ups, how intense are they and how long do they usually last? What are your daily symptoms? And what are your treatments?

About two months after the flare that led to my diagnosis, and after the first background treatment, I had a second one. It was the right side of my body that was affected. I had a loss of feeling in my arm and leg and slight discomfort when walking. These symptoms were not very incapacitating and did not require treatment with corticosteroids.

The two flare-ups lasted a few weeks and left me with some after-effects. I still see double when in my peripheral vision, which doesn't bother me too much, but I have to be extra careful when I ride my bike, for example.

At times I still limp, my walking can be slow (I sometimes get passed by little grandpas!), I tire more quickly and I have neuropathic pain. The latter mainly affects my right arm but, thanks to treatment, it is only present when I am very tired.

The loss of feeling doesn't bother me too much, but it makes me clumsy. I now carry fragile objects with my left hand automatically, but all the other things that I keep picking up with my right hand regularly end up on the floor.

Since starting my secondary disease-modifying therapy 4 years ago (a few months after diagnosis), I have not had another flare-up, and my MRIs show no new lesions.

I consider myself to be minimally disabled by multiple sclerosis. For the past 2 years, it has been the migraines that have greatly affected me. The episodes were numerous and long, I had few days of respite.

I tried many different treatments to limit them, without success! Until the introduction of anti-CGRP treatments, which are very expensive and not covered by health insurance, but which work for me. I am extremely lucky to be able to use them.

To recap, I take 3 basic treatments:

How does multiple sclerosis impact your personal and professional life?

I work as a freelancer and, since the diagnosis, I accept fewer projects so as not to overwork myself, I'm already tired enough as it is! It's a bit the same in my private life, I can't do as many things as I'd like, but I've accepted this slower pace.

How did your family friends react when you were diagnosed with your condition? Are they understanding of what you're going through?

I have seen very little reaction to it, in fact! I heard from a few people that so and so also has MS, but in general people haven't really reacted to it. I've never been subjected to any negative or inappropriate remarks, I feel like I've mainly received kind, supportive words.

My illnesses are not taboo. I talk about them openly, so I think the people around me have a pretty good idea of the role they play in my life.

You are a children's illustrator and have decided to talk about multiple sclerosis through your illustrations on social media? What led you to share your story in this way? What messages do you want to convey?

Right after my diagnosis, as an additional way of accepting the disease, I said to myself that I wanted to do something about it, even if it was still quite vague. And in the weeks that followed, I wanted/needed to read detailed testimonials from people who had gone through the same thing as me.

Maybe I didn't look hard enough, but it all seemed too brief! For a year, I let the idea of writing about my life with multiple sclerosis grow. I jotted down ideas, wrote texts, drew, and tried to create what I would have liked to find after my diagnosis.

That's how the desire to bring "Sclero" to life using my pencil came about. It came out as a sort of shadow of myself, a character who is a bit creepy but not really malicious. For me, it represents what an auto-immune disease is. Your body that "thinks" it's doing the right thing but in fact turns against you, against itself.

I try to tell in detail my experiences, my emotions, the hard, the beautiful, the funny... I try to make people understand what living through MS has done to me and I love to exchange with those who have lived it too, to discover feelings different from my own.

I would love to work more on "Sclero and Me", but unfortunately it takes up a lot of my energy and I don't have a magic solution at the moment. Apart from that, my plan is to continue to enjoy my life on a day-to-day basis as long as my background treatments are working!

What advice would you give to Carenity members also living with multiple sclerosis?

I don't think I'm legitimate enough to give advice, everyone is different and does the best they can in their own situation... Actually, I do! There is one thing that I think is important and that is valid for all chronic illnesses, for everyone: the best you can, try to find doctors that you are comfortable with and that you trust. Confidence in their knowledge/competence, and with whom you feel comfortable to talk, to ask questions, with whom you feel listened to.

Thanks to Carenity for allowing me to talk (even more!) about "Sclero and Me", and thanks to you for reading this far!

Many thanks to Coline for sharing her story with us on Carenity!