Sleep apnea: Everything you need to know!

Sleep apnea is a sleep a disorder that presents as repeated, uncontrolled interruptions (apneas) of breathing during sleep. There are three types of sleep apnea: central, obstructive and mixed. Of the three types, obstructive sleep apnea (OSA) is the most common, so it will be the focus of this article.

The obstruction of the airways seen in OSA is mainly due to the relaxation of the muscles of the pharynx and the tongue during sleep. Apnea occurs when the airways are totally obstructed and hypopnea occurs when the passage of air through them is narrowed (partial obstruction). The vibrations produced when the air passage is narrowed (at the base of the tongue and the soft palate) are the cause of the nocturnal snoring that is strongly associated with this syndrome. 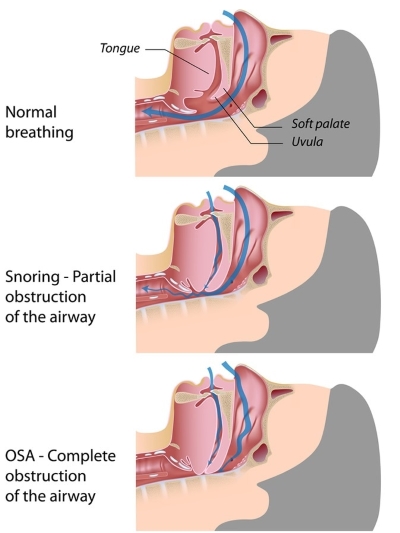 During an apnea episode, the body is deprived of oxygen (hypoxia) which triggers a reflex mechanism that allows the airways to reopen. This triggers unconscious micro-awakenings for the patient. These episodes last 10 to 30 seconds and occur on average 5 times per hour of sleep (i.e. up to 100 times per night). It is because of the frequency of these apneic episodes that it is difficult, if not impossible, for the patient to achieve "restful" sleep. This is why people with sleep apnea are often prone to daytime drowsiness and chronic fatigue. Some patients suffer from memory problems or difficulties concentrating, headaches, reduced alertness (they are more often victims of accidents at work or in the car), irritability or even low libido.

Most of these symptoms are reversible thanks to apnea treatment, which is designed to reduce sleep fragmentation.

This syndrome affects about 22 million Americans, but its prevalence increases linearly with age.

Age, and thus aging (accompanied by the weakening of muscles associated with breathing) is the main risk factor for sleep apnea.

Gender is also a risk factor: the syndrome is seen twice as often in men than in women.

The second major risk factor for OSA is obesity. Excess fat in the neck area of overweight or obese people exposes them to more risks due to the reduced diameter of the airways. However, it is important to know that not all obese people suffer from sleep apnea. There may be a genetic and anatomical predisposition (e.g. a small space behind the tongue, a particular size and morphology of the jaw) that makes a person more susceptible to sleep apnea.

A person has sleep apnea when they experience an interruption in their breathing of more than 10 seconds more than 5 times per hour of sleep.

There are many questionnaires that can lead to the suspicion of sleep apnea, but it is important to know that only sleep studies are recommended and recognized for the diagnosis of OSA.

Indeed, a polysomnography (sleep study) must be carried out to analyze sleep, often in a specialized medical center. It is a complete, reference examination that records all activity emanating from the body during sleep: it picks up electrical signals, and analyses the rhythm of these signals to outline the different phases of sleep.

In addition, it may be requested to perform a respiratory polygraph at night, which records breathing (during at least six hours of sleep), usually at home, with the help of:

To determine the severity of the disease, the number of apnea/hypopnea per hour of sleep is measured: known as the Apnea-Hypopnea index (AHI). 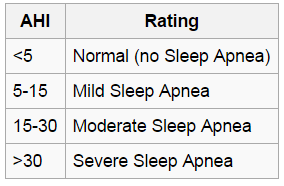 What are the health risks and possible complications of sleep apnea?

Though sleep apnea is not directly life-threatening, it does expose patients to cardiovascular and cerebrovascular complications (high blood pressure, heart rhythm disorders, atherosclerosis, coronary heart disease, heart failure), or even to type 2 diabetes or metabolic syndrome (abdominal obesity associated with metabolic disorders). This type of condition increases a patient's overall cardiovascular risk, i.e. the risk for that individual of succumbing to a cardiac condition over a period of 10 years.

Indeed, episodes of apnea (or hypopnea) that temporarily deprive the body of a normal supply of oxygen have harmful consequences. Several times per hour of sleep, in order to overcome these episodes of hypoxia (lack of oxygen), the body sets up reflexes that excessively stimulate the sympathetic nervous system (controlling the heart rate) which in turn releases factors influencing metabolic and cardiac parameters (such as cortisol released in case of stress or catecholamines such as adrenaline). In a state of hypoxia, the body compensates by increasing the workload on the heart and raising the blood pressure, saying to itself "if there is no more oxygen, it is because the heart is not pumping enough blood (carrier of oxygen to the organs)". In addition, the increased exposure of the cells in the vascular walls to oxidative stress and inflammation contributes to and accelerates atherosclerosis (the build-up of plaque in the arteries) leading to most coronary diseases.

First of all, attention is focused on lifestyle and dietary measures: a regular sleep schedule, quitting smoking, avoiding alcohol or sleeping pills are recommended to promote natural sleep and weight control (balanced diet).

A number of useful tips have been shown to increase comfort at night, in particular avoiding sleeping on one's back, which is conducive to snoring. Sleeping on one's side can reduce the number of obstructive episodes per night.

Dental appliances called mandibular advancement devices (MADs) are recommended for mild-to-moderate apnea (AHI between 15 and 30) without severe symptoms: these devices push the lower jaw forward (increasing the space between the base of the tongue and the pharynx) and keep the tongue back, making it easier for air to pass through. These are custom-made devices to be worn every night. They are sometimes used in cases of failure or intolerance of continuous positive airway pressure (CPAP). Mandibular advancement devices can be provided by a dentist, but they may or may not be covered by all insurances You should refer to your primary care physician who will be able to advice if you if this treatment is appropriate for you.

Nocturnal ventilation is indicated in case of severe apnea (AHI >30) or moderate apnea if the symptoms are severe (underlying cardiovascular disease). It involves the use of continuous positive airway pressure (CPAP): CPAP sends air (slightly over-pressurized) through a face mask into the airways to keep the airways open during sleep. This type of device is restrictive but offers very good results. There are different types of masks (nasal pillows covering the nostrils, nasal masks covering the entire nose, etc.), devices and accessories to help patients find the most comfortable model. CPAP machines are covered by the NHS.

It can be noted that the two treatments have comparable effectiveness. In fact, despite more obvious results for CPAP, patients wearing dental appliances tend to keep them on longer, so the overall effectiveness is relatively similar.

As a last resort, and if other sleep apnea treatments fail, surgery may be performed to widen the airways. However, this option is reserved for patients with anatomical ENT and maxillofacial abnormalities.

Sleep apnea exposes patients to significant cardiovascular risks, making it essential to diagnose this chronic pathology as soon as possible.

In recent years, the emergence of smart devices seem to have helped users to become aware of the importance of good sleep and good health.

Some examples include connected watches like the Fitbit, the Apple Watch, the Polar Sleep + watch which generates data from your physical activity and sleep, or the “Withings Scanwatch”, a real medical monitoring tool (having received the CE certification for medical devices) as it is able to record an ECG (electrocardiogram).

Even if they do not replace a real medical diagnosis of sleep apnea, it is hoped that this type of connected device will help users to be attentive to the first signs of the disease.

Was this article helpful to you?

Share your thoughts and questions with the community in the comments below!

Great article.....I would probably be dead without my CPAP

The Bi pap is not cutting it for me. Last night alone  19 per hour!!!  What can you tell us about the implant "inspire"?

I see you have not mentioned that and would like your opinion of the device.

In my opinion, sleep apnea is a very danger things in a person. To avoid sleep apnea you should keep your daily routine set, before going to bed relax your mind don't think about any stress situation take good and healthy food like minerals use dry fruits like almond which is beneficial for better sleep.

Sleep apnea and travel: How to travel with your CPAP device?

What is the one symptom or complication that is most troubling?

I can't get used to my CPAP mask

Have you tried a mouth device for your sleep apnea?

Having trouble with my Inspire implant

Sleep apnea: Is it hereditary?

Hypersomnia, how to manage it?