Foods That Can Irritate COPD

Chronic Obstructive Pulmonary Disease (COPD) is an umbrella term used to refer to any illness that affects the ability of the lungs to function normally. This article will discuss foods that can irritate COPD.

The lung conditions usually cause irreversible lung damage and are progressive in nature. This indicates that there is no cure for COPD, only managing the symptoms to make the patient breathe easier.

Part of managing the symptoms of COPD include making lifestyle changes such as quitting smoking, which is often the main cause of the condition, as well as making healthier changes to diet and exercise regimes. Here are some foods that should be consumed in small quantities or generally avoided by patients of COPD.

Any food when fried becomes extra greasy and will lead to extra effort during digestion. The breakdown of fats takes longer in the digestive system and a sensation of being bloating can occur in the abdomen. The feeling of being bloated causes discomfort to the patient. This makes it difficult to take full breaths as the diaphragm hurts due to the extra gas produced by the digestive juices.

Fried foods are also associated with easy weight gain. This extra fat usually accumulates in the area around the middle of the torso, putting more pressure on the diaphragm and causing discomfort for the patient during breathing. Some such foods that should be avoided include french fries, onion rings, fried chicken, fried fish, jalapeno poppers, and deep-fried pickles.

This refers to any kind of drink which may have been aerated with carbon dioxide. They usually include artificial preservatives, sweeteners and colours, none of which are good for the health of a person suffering from COPD.

The pressure in the middle of the torso affects the ease with which the patient can breathe. Furthermore, the sugars, sugar substitutes and caffeine which may be part of these drinks have no nutritive value for the patient. It is best to drink pure water to stay hydrated and allow the body enough fluid to carry out all metabolic activities. Therefore, one should avoid drinking sodas, energy drinks, colas and other aerated drinks. 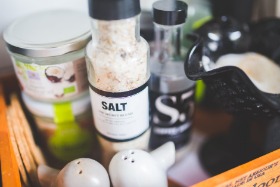 A little bit of iodized salt is essential to maintain a healthy sodium balance in the body. However excessive consumption of salt can lead to water retention in the body. This is a condition known as oedema. The extra water acts just like the extra fat around the diaphragm, making it difficult for a patient with COPD to breath.

Related Stories
New biodegradable sensors could assist doctors when examining serious health conditions
Nurses at risk of chronic lung disease COPD due to regular disinfectant use
Study: Combining non-invasive ventilation and home oxygen therapy can reduce hospital readmissions for chronic COPD patients
The reduction of salt content in food will help to reduce the water retention and not cause excess harm to the lungs. While salt is needed for flavouring the food, other herbs and spices may be added to make up for the taste. Using lime juice in place of salt in salads is one way to substitute salt without losing out on taste when eating food.

Milk is often called a complete food because of all the vitamins and calcium that it can provide the body. Unfortunately, casomorphine is a product of the breakdown of milk digestion. This is a chemical that increases the mucus produced in the intestine. Consequently, a lot more phlegm is produced and needs to be expelled by the body.

The primary way the body disposes of phlegm and mucus is by coughing it out. This extra coughing and wheezing can cause discomfort and pain to a patient of COPD. Patients should avoid having a warm glass of milk at night before sleeping. Other foods that may cause a problem and should be avoided, include ice cream, yogurt, cheese, butter and buttermilk. Use alternatives such as soy milk or almond milk.

Unfortunately, the extra fibre causes them to give patients with COPD indigestion and bloating due to the extra gas generated in the system. The bloating causes a difficulty in breathing for the patient. For this reason, it is best to limit the servings of cruciferous vegetables in their diet.

Processed meats have preservatives called nitrates, which extend their shelf life. They are not a healthy option for anyone, but are especially bad for those suffering from COPD. When eaten in large amounts, the lung condition is said to worsen. This means bacon, ham, hot dogs and other cold cuts should be consumed as little as possible.

There is no need to completely eliminate any food. Each person’s constitution is different and will react differently to the foods, thus the patient is the best judge of how much of these foods he or she should be consuming.

I just created a post about that I am trying to help manage and help my COPD through my diet. I am using anti-inflammatory herbs and spices and focusing on anti-inflammatory foods. This is a good article and in addition to trying to limit consumption of the above foods, to also look into the right foods that can help you with your COPD.

Foods That Can Irritate COPD https://www.carenity.us/forum/copd/symptoms-and-complications-of-copd/foods-that-can-irritate-copd-69 2019-08-26 02:15:41

Do you have trouble sleeping due to COPD?

If you could get rid of one of your COPD symptoms, which one would it be and why?

Mucus and discomfort in the throat: What can I do?

Wearing a face mask with COPD: How do you cope with it?

Do you have trouble sleeping due to COPD?

If you could get rid of one of your COPD symptoms, which one would it be and why?

Mucus and discomfort in the throat: What can I do?

Wearing a face mask with COPD: How do you cope with it?

COPD: "With time, I got used to the fact that I had to live with this disease."

COPD: “Both athletic and a non-smoker, I was still diagnosed with COPD...”

COPD: “The toughest thing is getting my mind to accept my new physical limitations.”

How to manage your COPD triggers

To vape or not to vape? Probably: Not to vape

Medication, treatments, and exercise : treatments for emphysema and COPD