Evaluate medical cannabis consumption among MS patients, evaluate its effects on patient symptoms and compare the results between two countries with different laws on the subject - France and Spain, those were the goals of our study, carried out between April and July 2019 on our French and Spanish platforms.

A topic of controversy, experimentation with medical cannabis divides and intrigues. But what do patients really think about it? We asked for Carenity members who are already using medical cannabis to express their opinions.

In order to understand patient use of medical cannabis, we chose to analyze two countries with very different laws on the subject. France bans the cultivation, fabrication, transport, importation, exportation, possession, sale, and use of medical cannabis. The country only allows consumption of certain varieties of Cannabis sativa L. than contain less than 0.20% of delta-9-tetrahydrocannabinol (a.k.a. "THC" - the compound behind the "high" that cannabis produces in many users). Spain forbids the sale or marketing of cannabis but permits citizens to cultivate the plant as long as the harvest is restricted to personal use and not sold to others.

The patients who responded to our survey where mainly female (73%) with an average age of 47. On average, they were diagnosed with multiple sclerosis 12 years ago.

Most respondents are living with Relapsing-Remitting MS (RRMS). This type of MS is characterized by sudden apparitions of new symptoms or worsening of existing symptoms, known as relapses or attacks, followed by quiet periods of remission. These attacks may result in persistent health complications, even when the patient returns to a remission state. This is the most common form of the illness.

We also sought to measure the severity of symptoms among our respondents, in order to evaluate the link between the frequency of cannabis use and severity of symptoms. Only 5,5% of respondents said their illness was not severe; nearly 12% need to use a cane to get around and 73% suffer from spasticity directly attributable to their multiple sclerosis.

The pain caused by multiple sclerosis

MS caused different levels of pain in our respondents. The average pain score is 4,1/10. 37% of respondents noted their pain at or over 6/10.

22% of respondents to our survey use some sort of medical cannabis. It should be noted that the legal status of medical cannabis doesn't seem to affect use, as numerous French respondents reported using it, despite noted difficulties in obtaining cannabis legally. On average, patients reported using it for at least 4 years. We also noted that men tended to use more than women. Consumption tended to rise in tandem with the patient-rated severity of MS symptoms. 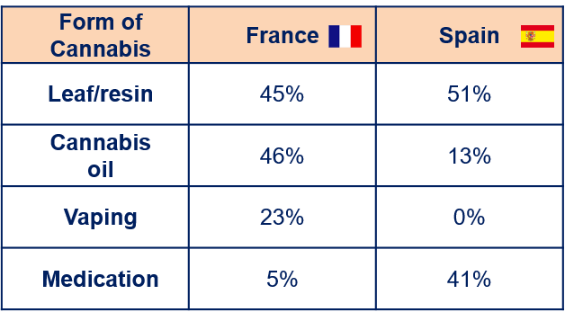 It seems that the laws in place, while not affecting the number of users in a country, do affect the form in which the cannabis is consumed: medication containing cannabis is legal in Spain and much more used than in France (41% vs 5%). The plant (and its resin) are consumed widely in both countries.

We didn't find a significant difference in consumption frequency between the two countries: 70% used at least once a day (69% in France and 72% in Spain), 18% at least once a week, 5% at least once every 6 months et 5% did not use in the last 6 months.

The respondents insisted on the positive effect of cannabis use not only on their general daily life (77%) but also their mood (66%) and their work, social, family and love lives (41%).

Respondents indicated relatively positive effects on the symptoms of MS, with a majority citing improvements on sleep disturbances and spasticity (76%) as well as sensitivity disorders (60%) and fatigue (56%). 68% of respondents are convinced that cannabis is better at combatting their pain than normal painkillers, and 65% reported uses fewer medications as a result. 75% said they did not feel dependent on cannabis: they noted no increase in consumption over time, neither in quantity nor in frequency.

Cannabis in the US, legislation and legal grey areas

Legally, the federal government of the United States prohibits any use of cannabis, medical or otherwise. However starting in the late 1990's, various American states began to authorize the use of cannabis products for medical reasons and in 2014, the House of Representatives passed the Rohrabacher–Farr amendment which prohibited the Justice Department from spending funds to interfere with the implementation of state medical marijuana laws and essentially defanged enforcement in states which authorized medical cannabis use. As of 2019, 33 states have done so. Access to CBD (cannabidiol) oil varies widely from state to state, with some state and/or local authorities banning it completely.

On the national level, the US prohibits the transportation, importation or sale of cannabis.

What is the future of medical cannabis?

In both the US and France, public and official perception of medical cannabis seems to be evolving in a positive direction. Although restrictions remain and the US, in particular, suffers from a very uneven legal landscape, it appears that the medical benefits of cannabis use are set for further study and greater authorisation may well be in the future.

What is your opinion on medical cannabis use? Are you favorable to its complete legalization? Have you already tried it yourself?

This survey was conducted among Carenity members living with MS and living in France or Spain, from 11 to 07 July 2019. 641 questionnaires were completed.

Yes. I have heard many people who have said it has helped them in many different situations.

7 people reacted to this article. What do you think about that? Join the community!