Emmanuelle, diagnosed with endometriosis later in life, agreed to speak with us about her health journey, from the initial symptoms to her treatments. Among those treatments, Androcur caused meningioma (brain tumors). Today she's fighting to warn other patients about treatment-related risks.

Hello and thank you for agreeing to talk with us. Can you tell us a little about yourself?

I'm a 55-year-old woman, with two children aged 31 and 24. I used to work at the Banque de France, as a financial analyst. I've worked in Paris, Vernon, Poitiers, and Caen.

When did the first symptoms of endometriosis appear?

I've always had heavy and painful periods. I remember sometimes in high school I had to change my pad once an hour, after every class! I thought it was normal. I had my first child very young, and then several miscarriages, before having my second child, both of them by cesarian section. After my second child, my periods hurt more than ever, and then the pain became permanent. 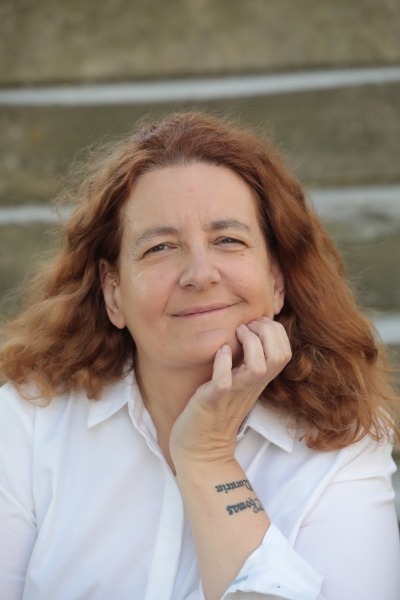 How long did you wait for a diagnosis?

I waited 8 years between the moment I realized something was wrong and I was in too much pain and the moment a doctor first said the word "endometriosis".

I did a lot of research on my end, but whenever I said: "Could this be endometriosis?", the doctors told me: "No, you've already had children, so it can't be." I even went to see a surgeon in my town and told him "Cut me open, there's something not right in there", and he told me: "Maam, we can't just cut people open like that!".

In the end, it was an occupational doctor, a woman who, after watching my condition deteriorate for years, was the first to say the word "endometriosis."

How did you react? Did you feel supported by those closest to you?

It was a relief to find out what was wrong with me. It wasn't a psychological issue like everyone kept telling me it was (my GP even referred me to a psychiatrist). I can't tell you how many times I heard: "Ah women and their bellies, they're always complaining about something."

What treatments have you or are you taking for endometriosis?

I was operated on and then I went through quite a few medications: Lupron, Decapeptyl, then Androcur and Belara. They were effective as long as I kept taking them regularly since they usually stopped the bleeding. Sometimes though, the bleeding came back anyway. In which case I had to get Decapeptyl or Lupron injections, which are quite painful.

>> Discuss treatments for endometriosis on our forum

But the pain is still there in the background since the operation didn't get at all the places where endometriosis can hide. It's a lot easier to live with than what I was experiencing before the operation, where for years, I had to take anti-inflammatories every day just to be able to go to work and take care of my kids.

How do you deal with endometriosis in your daily life?

Currently, I've come off all my meds, because I'm pre-menopausal, and I bleed a lot less. And taking hormonal treatments isn't possible for me anymore. I often manage my pain through hypnosis. It was an anesthetist doctor who first taught me how to use hypnosis to manage pain. Even if I didn't believe a word of it at first - turns out it works quite well!

What were the initial symptoms of meningioma?

The first symptoms were fatigue and headaches. Since one of the symptoms of endometriosis is fatigue, it didn't seem any different from what I had already experienced before. But then I started having brain fog, one of my legs started to go limp, I lost all feeling on the right side of my mouth and had trouble talking (all chalked up to fatigue), a whole load of neurological signs that for years my doctor just couldn't figure out. Finally, when I lost control of my right hand, he ordered a brain MRI.

How did you find out it was meningioma? Were you misdiagnosed at first?

When I got the brain MRI, in 2017. 5 meningioma tumors and one adenoma tumor on my pituitary gland, all of them caused by the medication I was taking to treat my endometriosis (treat, not cure!). I was given a treatment with potentially fatal side effects for an illness that isn't fatal, even if it can be debilitating. I know there are benefits and risks with any medication, but it's easier to weigh the benefits if you understand the risks!

>> Join our Endometriosis Forum and talk to members and carers living with the same condition!

Before all this, I was told I was depressed and I needed to exercise more (the treatments made me gain 60 pounds), and that was why my leg was limp! I was also tested for Lyme disease, and since the tests for that disease are not very trustworthy, I was treated for it anyway.

How do you treat your condition today? How are you doing?

I was operated on to remove the biggest meningioma tumor the one that was affecting my speech and paralysing the right side of my body (not to mention causing problems with breathing, swallowing, etc.). It's been two years since my operation, and I've got my mobility back, but my speech isn't like it used to be. I get tired very easily, and I suffer from dizziness, memory loss, and headaches both where they opened up my skull as well as from the 4 tumors that are still in there. I consider myself lucky to be here at all, there are people who've died on the operating table.

Androcur is a medication prescribed to treat endometriosis that raises the risk of brain tumors. Do you believe it's responsible for your meningioma?

I'm 100% sure it's responsible because when they did an analysis on the tumor they removed, it showed the presence of progesterone receptors. Any medication that contains progesterone encourages meningioma growth. And a study done by CNAM in 2018 showed that Androcur has an especially high risk of causing meningioma. There are studies being done on Lupron, nomegestrol acetate and other progestins, and the ANSM started issuing warnings on the subject back at the beginning of 2019. It's a real risk, as was the case with Androcur. At my 1st appointment, the neurosurgeon even said to me: "Everything you've got in your head is because of the endometriosis treatments you took."

Did anyone warn you about the risks before your starting taking the treatment? What's your opinion on that subject?

I was never warned, not by any of the doctors who prescribed me Androcur. And it was 3 gynecology professors who prescribed it for me! I could understand if a GP isn't necessarily up to date with all the potentially serious side effects of every medication he or she prescribes, but I find it unacceptable for someone whose specialisation is Gynecology. They don't have to keep track of a very wide array of medications. And none of the gynecologists ever asked me if I was experiencing neurological symptoms for example, which could have tipped them off to the fact that all my symptoms were linked to the drug they prescribed me.

What advice would you give to a patient who's been diagnosed with endometriosis?

The advice I give in my association, AMAVEA, which I created for women suffering from meningioma is: There needs to be clear and honest dialogue between patients and gynecologists and gynecologists cannot afford to keep their heads in the sand when it comes to the potentially serious side-effects that the medications they're prescribing may cause. They need to explain the benefits and the risks to every patient.

To answer your question, I'd like to give two scenarios:

- a woman has no detected meningioma tumors and is taking hormones: no need to panic, but she needs to be watchful (and her doctor does too) for neurological symptoms that may indicate there's a problem. Meningioma tumors can grow silently for years before they show up on anyone's radar. So a woman, in this case, should ask for a brain MRI if she has the slightest doubt.

- a woman already has one or more detected meningioma tumors, and they haven't been operated on (and the tumors haven't been analyzed, just detected), the safest option is for her to stop all hormonal treatments. She and her gynaecologist need to discuss her options together.

It always comes back to the patient-doctor relationship. And it shouldn't be the sort of relationship where the patient has unquestioning faith in her doctor since in my case I trusted 3 renowned professors of gynecology and endometriosis specialists to keep me safe, and not one of them said anything about the risks.

My hope is that with the new warnings issued by the ANSM, which have been picked up by the media and associations, women will finally get the information they need!

A big thank you to Emmanuelle for sharing her experiences! What about you, have you already taken Androcur? Did your doctors talk to you about the risks linked to this treatment?

Where have your lesions spread?

How long does it take to heal from endometriosis surgery?

What does Femara do for endometriosis?

Can endometriosis be cured?