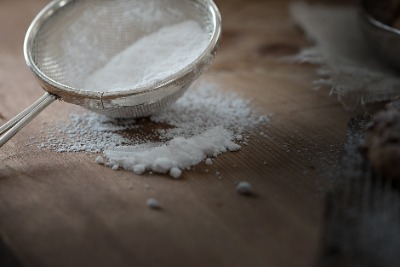 Within tumors, large portions are deprived of oxygen. Scientists know that these hypoxic regions tend to be the most resistant to treatment.

If a cell is unable to access adequate oxygen, it slows down and enters what is known as a quiescent state.

The molecular switch mTORC1 is responsible for assessing the situation before telling the cell whether or not it should divide.

If mTORC1 is not present, the cell's internal processes are shut down. Deep within tumors, mTORC1 activity is almost non-existent.

Baking soda, acid, and cancer
New research delves deeper into this mechanism and finds an incredibly simple way to reverse it: baking soda.

The study took place at the Wistar Institute and the University of Pennsylvania, both of which are located in Philadelphia. The scientists published their results this week in the journal Cell.

Lysosomes, the minuscule bags of enzymes that break down proteins and other biomolecules, were found to play a key role.

The lysosomes of interest are usually situated next to the nucleus. However, when conditions are more acidic — which develops during hypoxia — protein motors transport lysosomes carrying mTOR to other locations.

This movement of mTOR away from the nucleus also transports it away from a protein called RHEB, which is essential for it to function. Without its primary activator, mTOR activity is reduced, the cell's processes slow down, and most metabolic activity stops.

The study was led by Chi Van Dang, and he explains why this occurs, saying, "Cells don't want to make proteins or other biomolecules when they're under stress. They want to slow things down and only awaken when things return to normal."

Boosting immunotherapy
When a cell enters this quiescent state, cancer drugs are much less effective. So, the researchers wanted to see if it could be overturned. They found that, when mice were given baking soda in their drinking water, the acidity of the quiescent regions of tumors was reversed.

Once this had occurred, lysosomes were sent back toward the nucleus, mTOR was activated by RHEB, and cellular processes were switched back on.

Dang explains what the scientists saw after mice had consumed baking soda, saying, "[T]he entire tumor lights up with mTOR activity. The prediction would be that by reawakening these cells, you could make the tumor far more sensitive to therapy."

Cancer immunotherapy has been demonstrated to be less effective in acidic conditions because T cell activation is reduced, so this finding could have important ramifications.

Acidity's role in cancer progression and treatment is a fledgling area of research, which means that much more work will surely follow. Dang and his team plan to continue their experimentation, focusing on how acidity impacts immunotherapy.

Your advice for those newly diagnosed with breast cancer

Hormone therapy in the treatment of breast cancer: Have you tried it?

Breast cancer: How do you stay positive?