What is breast cancer?

The breast (also called the mammary gland) is made up of different compartments, which consist of:

These compartments are surrounded by a supportive tissue, made up of fat, fibers, and blood and lymphatic vessels. 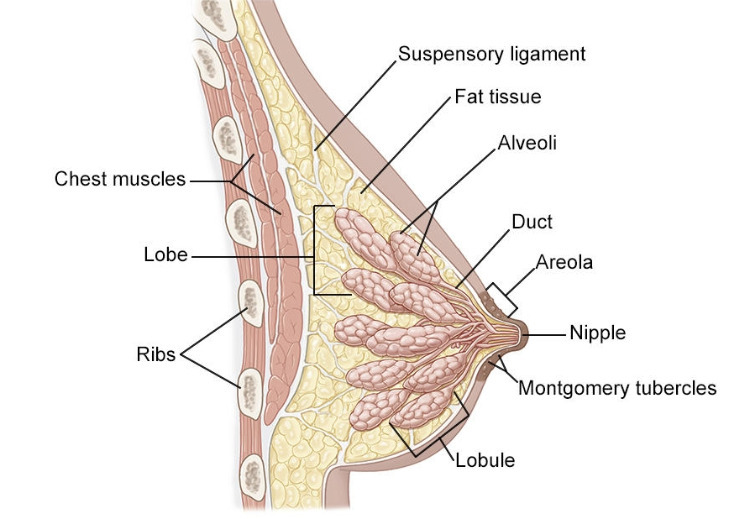 Breast cancer is the most common and deadly cancer affecting women in the USA. It results from malfunction of the cells, which multiply and usually form a mass called a tumor.

There are different stages of the disease:

Breast cancers are mostly hormone-dependent, depending on estrogen (ER +). Some are dependent on the overexpression of HER2 (Human Epidermal growth factor Receptor 2), which is a transmembrane receptor involved in the regulation of cell proliferation. The others are said to be triple negative because ER-, HER2- and do not have a characteristic surface marker.

It is the most common cancer in women with 50,000 new cases per year. It affects 1 in 10 women and has a female to male sex ratio of 99 (breast cancer exists in men). It is a rare cancer in women under 30, with a peak in cancer development between the ages of 60 and 69. Relative 5-year survival rate is 88% and 10-year survival rate is observed in 80% of localized forms. Nevertheless, it is the leading cause of death from cancer in women, with a mortality rate  of over 40 thousand deaths per year in the US.

Symptoms and complications of breast cancer

Symptoms of breast cancer are:

When breast cancer has spread to the rest of the body, other symptoms may appear, such as fatigue, nausea, weight loss, bone pain, and blurred vision.

Among the risk factors for breast cancer, there are personal factors, such as:

There are also family or genetic risk factors:

Among the genetic predispositions, we can cite:

Finally, there are behavioural risk factors, which can be:

Self-examination is a simple procedure to be performed once a month by all women, always at the same time, that is, a few days after the end of period. It allows you to detect an anomaly rather early and report it to your doctor. The self-examination consists of standing or sitting in front of your mirror and inspecting the appearance of your breasts (fluid discharge from the nipple, dimples, orange peel skin ...). Then you should raise an arm and carefully and firmly palpate the breast with the three fingers of the opposite hand, making small circles, from the outer part of the breast (paying particular attention to the area between the armpit and the breast) to the nipple (and thus verify the absence of lump or thickening).

Mammography is a standard radiographic examination, bilateral and comparative. The signs of breast cancer that can be observed are opacity, architectural disorganization or microcalcifications.

There is a free breast cancer screening programme for women aged 50 to 74, which consists of a mammogram every 2 years.

Ultrasound is a second-line examination, complementary to mammography, performed when the breasts are dense, or to assess the abnormality detected on mammography.

The diagnosis of breast cancer consists of several steps:

The diagnosis of breast cancer consists of several steps:

In the event of invasive localized cancer, an extended assessment may be performed: bilateral mammogram, liver ultrasound, abdomen and pelvis scan, chest X-ray, bone scintigraphy (bone scan), MRI and brain scan (if neurological symptoms are present), or even a FDG PET scan.

This classification is used to choose the best therapeutic strategy.

The SBR score is established based of 3 criteria:

Thus, the total of the scores gives the SBR grade:

There are different tumor markers for breast cancer:

Surgery does not only remove the tumor, but also confirms the diagnosis and specifies the stage of cancer development by assessing the invasion of the axillary lymph nodes.

There are two types of surgery for breast cancer:

In uninfected women carrying a BRCA1 / 2 mutation, prophylactic bilateral mastectomy is, despite its mutilating nature, the most effective cancer risk prevention measure.

In addition, the search for the "sentinel lymph node" allows, in case of small tumors, to remove only certain nodes (the first lymph nodes that drain the tumor). They are identified by the injection of a dye solution (patent blue) in the vicinity of the tumor. The lymph node is analyzed intraoperatively:

Finally, immediate reconstruction after mastectomy is not recommended if radiotherapy is planned.

Carried out 4 weeks after the surgery, radiotherapy is called "adjuvant". Its aim is to minimize the risk of a local relapse, and it increases the overall survival rate. 4 areas can be treated by radiotherapy:

Radiation therapy is not used in case of a relapse if it has already been done the first time.

Possible complications are rash, swelling of the breast, pain, fatigue, and long-term cardiovascular and lung problems.

Its aim is to increase relapse-free survival and overall survival after surgery and / or radiotherapy.

In pre-menopausal women, inhibition of LH production can be achieved with LH-RH analogues, such as goserelin (Zoladex®) or leuprorelin (Prostap®, Lutrate), which are implants injected subcutaneously (SC) for prolonged administration (1 month). They are indicated in cases of RH + (ER +) and HER2 +++ breast cancer, or if there is a gynecological indication with endometriosis and uterine fibroma. The side effects that may be observed are headaches, mood disturbances, hot flashes, sweating attacks, decreased libido, joint pain, skin reactions, high blood pressure or the risk of fractures.

Alternatively, competitive estradiol inhibitors can be used, such as tamoxifen 20 mg / day. The latter is indicated in RH + (ER +) and HER2- breast cancers in premenopausal women. 5 years of treatment reduces the risk of a relapse by 45 to 8% and the risk of death by 32 to 10%. Immediate intolerance can be observed and consists of hot flashes, vaginal pruritus (itching), leucorrhea (bloodless vaginal discharge) and nausea. It also increases the risk of thromboembolic events of the order of 1% (stroke, embolism), endometrial cancer by 0.4 to 1.7% (requiring gynecological monitoring) and cataracts. There are also drug interactions with CYP 2D6 inhibitors (paroxetine, fluoxetine, quinidine should therefore be avoided if treatment with tamoxifen).

In addition, fulvestrant (Faslodex®) can also be used as a second line treatment in postmenopausal women.

They are all administered orally and indicated for ER + breast cancer in postmenopausal women. Slightly to moderately severe side effects that may be observed are hot flashes, hair loss, digestive disorders, asthenia, drowsiness, headaches or rash. Bone and joint pain may also be observed and the risk of osteoporosis is increased compared to tamoxifen.

Its aim is to prevent tumor growth by interfering with the synthesis of nucleic acids (DNA and RNA), blocking cell division, inhibiting neovascularization of tumors, inducing or restoring apoptosis (self-destruction of cells) and stimulating the immune response.

The molecules used all have an influence on DNA and can be:

These 3 molecules are combined in the FEC protocol (fluorouracil, epirubicin and cyclophosphamide).

The common side effects to all these treatments are:

Some side effects are drug-specific:

Different molecules can be used:

Other treatments used are:

Close medical follow-up for several years is necessary for women who have received treatment for breast cancer, in order to detect the onset of late side effects and to quickly screen for any relapse. This follow-up is carried out by a multidisciplinary team composed, among others, of a general practitioner, a gynecologist, an oncologist, a radiologist, a surgeon, a nutritionist or a psychologist.

The classic scheme includes follow-up visits every 3 to 4 months, then every 6 months for 5 years, then once a year. However, this visiting schedule must be discussed and adapted to each patient, in particular according to the severity of the cancer and the risk of relapse. In fact, for women who have suffered from metastatic breast cancer, follow-up is more intense, every 2 to 3 months or every 2 to 3 courses of chemotherapy, if it is administered over a long period of time.

The first follow-up mammogram should be performed 1 year after the initial mammogram and at least 6 months after the end of radiotherapy.

Finally, breast reconstruction requires a follow-up visit with the surgeon who performed it, every year or every 2 years.

In order to be better prepared to fight against the progression of cancer and the side effects of treatments, it is important to have a balanced diet, to eat food with anti-inflammatory properties and rich in antioxidants: fruit and vegetables, olive oil, fatty fish, nuts ... If cancer is treated with hormone therapy, vitamin D and calcium supplements may be helpful in preventing osteoporosis.

It is also essential to practice a regular physical activity (cycling, swimming, walking, gardening, cleaning ...). It is proven that a well-adapted, regular and moderate physical activity can reduce fatigue caused by treatments.

Communicating, sharing your doubts and fears about the disease (new side effects, questions about a new treatment) with your doctor, but also with those around you, is important. It may also be beneficial to turn to support groups, associations of patients with the same disease. You can also join online patient communities, like Carenity Breast Cancer Forum. If necessary, psychological support (psychologist, psychiatrist, etc.) can be considered.

Getting back to work

A sick leave, the duration of which depends on the type of treatment and on post-operative complications, may be prescribed by your GP. In addition, reasonable workplace or job role adjustments can be considered, such as working reduced hours, or some workstation adjustments, for example. This can be discussed with your medical team, occupational health professional or your HR department.

In conclusion, breast cancer is the most common cancer in women. However, detected early, it can be cured in 9 out of 10 cases. It is therefore important to perform self-examination and regular screening. There are many treatments, used alone or in combination. Adapted to each patient (according to their clinical, biological and genetic characteristics), they make it possible, despite the side effects, to improve the quality of life and the overall survival rate of patients.

Breakdown of 1 348 members on Carenity

What is breast cancer?

- Breast cancer: Cause and risk factors

What was your age and what initial...

Breast cancer - How are you dealing with...

Has breast cancer affected your marriage...

What are you doing for International FLAT...

Breast cancer and intimacy: How do you...

Breast cancer: How have you been feeling?

Sources of comfort during breast cancer...

Have you noticed perscription prices... 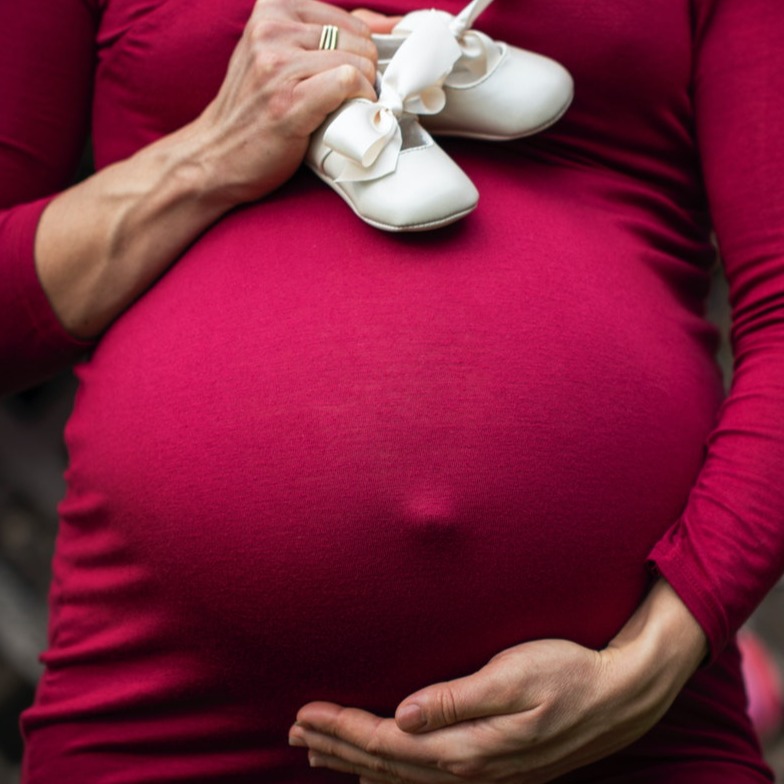 Breast cancer: "Being pregnant and having cancer is possible, I did it!" 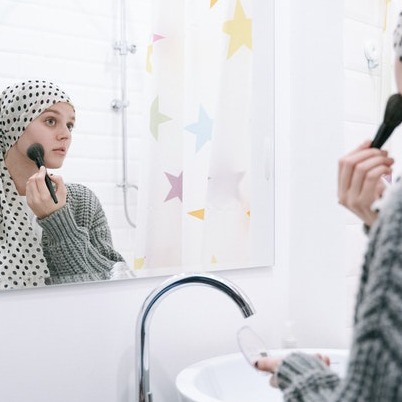 Breast cancer: "Taking care of yourself should be your priority!" 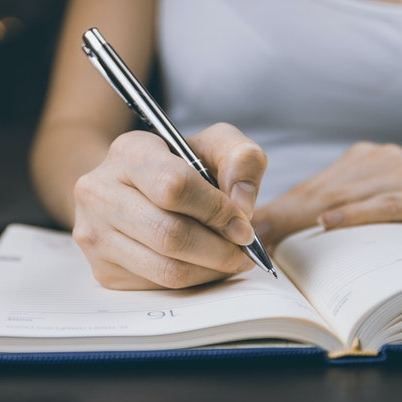 Breast cancer: "Writing has become indispensable for me!”