@Christelleboucquet, a member of Carenity France, went through hormone receptor-positive breast cancer. After chemotherapy, a mastectomy and radiation, she is now in remission. Although she faced some difficult times, she has always been able to stay strong and has even written a novel published by French publishing house Editions du Vénasque!

Hello, you wanted to share your story about hormone receptor-positive breast cancer. First of all, could you tell us a bit more about yourself?

When I was diagnosed with cancer on January 28, 2019, I was an administrative assistant, separated and a mother of two children: a little girl, Joyce, 6 years old and a little boy, Jonas, 3 and a half years old. I was then passionate about rollerblading which I did in a club every week. I liked the feeling of freedom that it gave me. I recently separated from another man I had met, who didn't cope as well with cancer as I did. 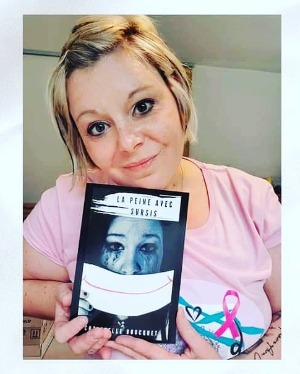 I am not a doctor, but a hormone receptor-positive cancer* as the name suggests and as the doctors explained to me, feeds on hormones. It is therefore necessary to stop the production of hormones produced by the female body in order to avoid a 50% risk of recurrence. This is called hormone therapy.
I am therefore "chemically menopausal" and I have to take a drug treatment that blocks the production of hormones: in tablet form every day, but also in the form of intramuscular injections once a month, and all this for five years.

*Some breast tumors have the characteristic of being hormone-sensitive, which means that the female hormones naturally produced by the body (estrogen, progesterone) stimulate their growth.

How did you find out that you had hormone receptor-positive breast cancer?

I didn't know what type of cancer I had, this was determined by the tests that were done on the tumor (biopsy). I never felt any discomfort or pain.

When I took a simple shower and lathered up, I realized that I had a very hard lump above my nipple.

Is there a history of other cancers in your family?

There are no cases of cancer in my family and the tests revealed that my cancer was not genetic. So there is no explicable cause for its development. It could be from stress, my environment, from chemicals... science can't give a precise reason.

How long did it take for the diagnosis of hormone receptor-positive breast cancer to be made? How many doctors did you see?

It went very quickly. Three weeks maximum - the time it took to get the results of the first biopsy.

I first met with my GP, the doctor who performed the ultrasound and mammogram. He was also the one who gave me the puncture for the biopsy. Then I met the surgeon. I went back for more biopsies because I had abnormal-looking lymph nodes on the ultrasound. Then I had a CT scan and an MRI.

Then I met the oncologist, but also the psychiatrist, the psychologist, the social worker, the pain specialist, the physiotherapist, the nurses in the chemotherapy department, the radiology staff and the radiologist herself... and probably others!

How were you told? And how did you feel about the news?

The surgeon told me very calmly in simple words. She expressed herself well and seemed to empathize.

For my part, I smiled foolishly and nodded my head but I could no longer hear or understand her words... That's why it's very important to have someone with you at every appointment.

Are you satisfied with your care pathway and the information you received about your cancer? Was the care provided in a timely manner?

I was taken care of at the Curie Institute in Saint Cloud, just outside Paris. I am very satisfied with their care and with the staff, who are really pleasant and caring. The treatment was quick. It took a week for the doctors' board to meet to decide on my treatment.

What treatment and care have you undergone?

My treatment began with 16 sessions of chemotherapy followed by a mastectomy (removal of the breast) and ended with 25 sessions of radiation.

For my chemotherapy, I received anti-vomiting and mouth ulcer treatments.

Did this treatment and care for your cancer have any serious consequences for you?

I never really had any side effects... but they did have a big impact on my personal life in a couple and on the man who supported me through all the different kinds of tests.

I've also had problems with my short-term memory since the chemotherapy.

How has it impacted your life?

In terms of negative impacts: the feeling of rejection on public transport when you are seen wearing a mask when it is to protect yourself and not because you are contagious.

The fatigue caused by the treatments has also led me to push myself physically and to struggle to keep control of my life and take care of my children first and foremost.

The separation from my spouse was, more than the cancer, the most difficult ordeal. Another feeling of rejection.

In terms of positive impacts, I would describe them in three words:

Are you currently in remission? Are you afraid of a recurrence?

I am in remission but I will not be declared cured until 4 years from now, if there is no recurrence. Of course I am afraid of it, but I'm mainly thinking about living life to the fullest.

Are you supported by those around you in dealing with the disease? Do they understand it?

Yes, I am 100% supported by my family and friends who have experienced cancer-related deaths. They understand me but have never really felt any changes in me, I take things philosophically.

You wrote a novel called "The Suspended Sentence" (La peine avec sursis). What's it about?

"The Suspended Sentence" is a 296-page novel, tracing the journey of two women who each fight in their own way, both against themselves and against illness.

In the novel, which is an autobiography, a little girl tells her story from her very first memory and the heroine tells her love story as well as her medical journey, without getting overly dramatic.

Why did you want to write about it?

To thank all the people who have supported me, who have been present or who have shown solidarity with me. And also because I had a lot of insomnia during my chemotherapy.

Finally, do you have any advice for other members with breast cancer?

I would like to recommend, where possible, to have someone go with them to all consultations, but also not to be afraid. There is no shame being afraid, but science has come a long way. I would also say that they should try not to isolate themselves, to stay cheerful and to LIVE!

And also to buy my novel to have a laugh and get off the beaten track!

Keep a positive attitude! The world is reaching out to you and the future is ours!

Many thanks to @Christelleboucquet for volunteering to share her story on Carenity.

And you, how do you cope with illness?

Feel free to talk about it in the comments, we are here to support one another!

I also had this type of cancer a few months ago. I had a biopsy to remove it. They suggested I have radiation and 5 years of a prescription. I have had a mammograph every year on time. . They do have better 3d equipment now. The suggested that I see a both a Radiologist and a Oncologist. My cancer was very small and nothing showed up in my limp nodes.

I am almost 82 and have decided to not have either at my age. Also, I take care of my legally blind husband. I know the side effects of both radiation and the medicines. I will have regular mammographs and if it returns, I will probably have more surgery.