The human immunodeficiency virus (HIV) is responsible for the destruction of immune system cells. It infects certain lymphocytes (immune cells), diverting the cellular machinery towards the production of new viruses. The infected cells can no longer perform their physiological function.

What tests are conducted to diagnose HIV? How do they work?

The human immunodeficiency virus (HIV) is a member of the retrovirus family of RNA viruses. The virus infects the cells of the immune system and diverts the entire cellular machinery to the production of new viruses. The resulting weakening of the body's protective system leads to an increase in opportunistic infections. In the most advanced stage of the infection, AIDS (acquired immune deficiency syndrome), the patient's life is threatened by infections such as esophageal candidiasis, toxoplasmosis, tuberculosis, pulmonary pneumocystis, or certain cancers such as non-Hodgkin's lymphoma, which are no longer controlled by the immune system.

The AIDS stage, however, is a late stage of the disease that can occur up to 10 years after the primary infection.

How to test for HIV?

HIV testing is important and there are several tests that can be used to detect the virus. The ELISA test, the point-of-care testing and NAT are the main techniques used.

You can learn more about the different treatments for HIV in our article!

What is an ELISA test?

HIV testing is carried out in a laboratory. The fourth generation HIV test, also called an enzyme-linked immunosorbent assay (ELISA), is a complete screening method that detects HIV1 and HIV2 antibodies from a sample of blood, as well as the HIV-specific antigen P24.

The body produces the P24 antigen in the first weeks after exposure to HIV and is only present in people who have acute HIV infection. This test can therefore be used to determine whether the patient has been infected with HIV in the last 6 weeks. If the risk behavior took place more than 6 weeks ago, the test will not reveal whether the patient is HIV positive.

A negative ELISA test result confirms that there has been no infection in the last 6 weeks.

What are rapid, point-of-care tests?

Quicker, rapid point-of-care tests also exist. This type of test also measures the level of HIV1 and HIV2 antibodies in the bloodstream, although its reliability is limited in the case of a recent exposure (it takes some time for the immune system to secrete antibodies). Indeed, it can detect an infection from 3 months and onward.

However, this test has the advantage of being able to provide results in 5 to 30 minutes. It also does not require a blood test but can be performed on a drop of blood taken from a fingertip or a swab of saliva from the mouth.

Any positive or doubtful result will need to be confirmed by an ELISA blood test, while a negative test ensures that there is no infection after an exposure of 3 months or more.

What are self-tests and how do they work?

There are two main types of test for HIV that can be used directly by the patient at home.

The first kind of test, a home testing kit, works exactly like point-of-care tests, where the patient collects a saliva sample or small drop of blood themself and tests it at home. The result is available within a few minutes.

The second kind of test, a home sampling kit, is a test where the patient collects a blood or saliva sample at home and sends it off in the mail for testing. A laboratory will likely conduct an ELISA test on the sample and the results will be sent to the patient within a few weeks.

Both of these tests are available over the counter in pharmacies or online. There is currently only one FDA-approved rapid self-test which can be purchased in-store or online. State laws regarding self-testing vary and may limit availability. Check with your doctor for additional testing options or consult the CDC self-testing search tool here to find options in your area. 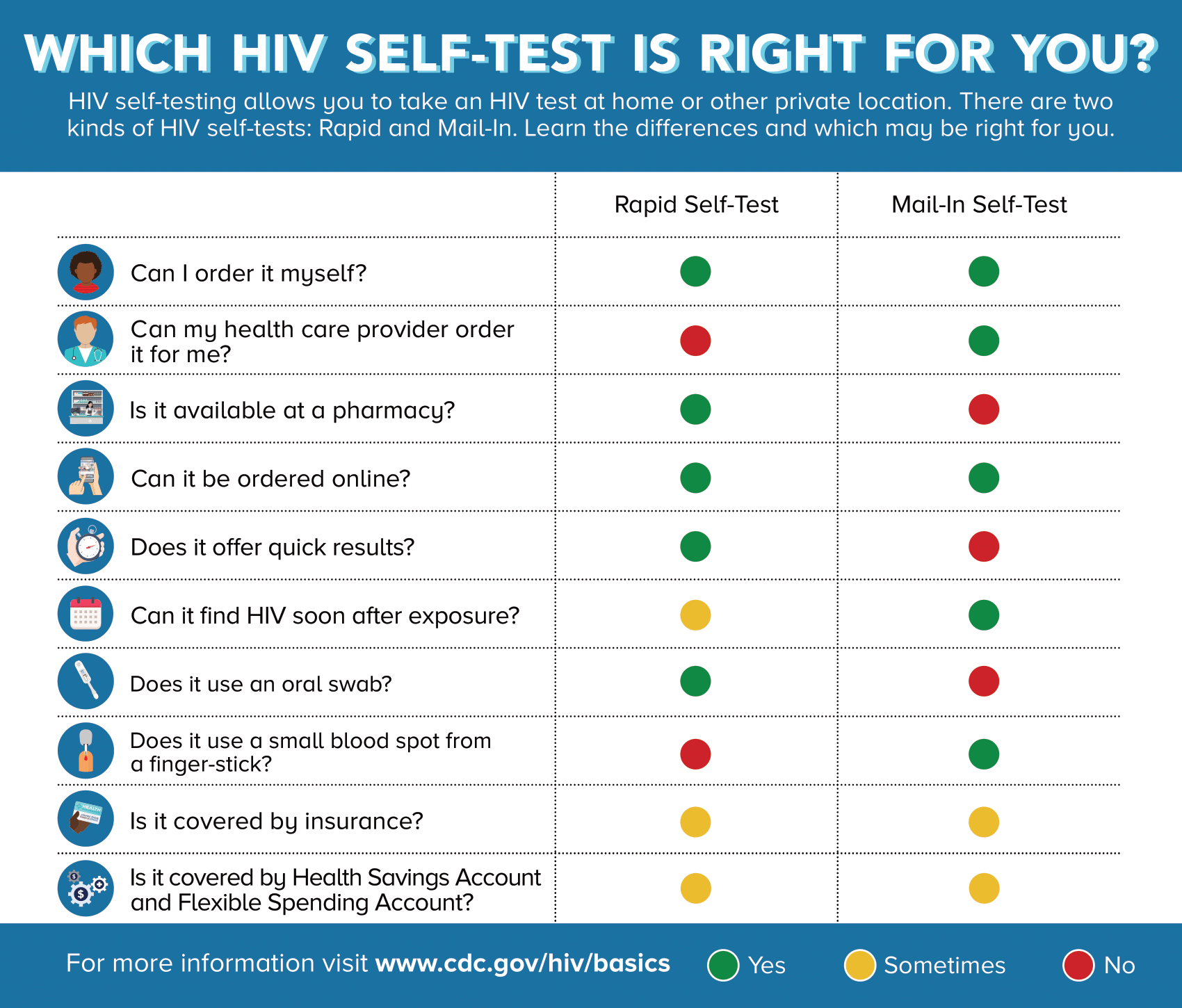 What are nucleic acid tests (NAT)?

A nucleic acid test (NAT) looks for the actual HIV virus in the blood in a window of around 10 to 33 days after exposure and is done via a blood sample drawn from a vein. The test can either tell if a person has HIV at the moment of testing or tell how much of the virus is present in the blood (known as a viral load test).

While NAT can detect HIV sooner than other types of tests, it is very expensive and is not routinely used for screening unless the individual has recently had a high-risk exposure or has early symptoms of HIV infection.

Was this article helpful to you?
Let us know by giving it a "like" and by sharing your thoughts and questions with the community in the comments below!
Take care!

Everything you need to know about HIV treatments, PrEP and viral load!

Facial wasting and getting treatment

HIV/AIDS: What are you doing to stay safe from the coronavirus?

What should my viral load be?