Relationships, sexuality and chronic illness: What do patients have to say?

More than 40% of Americans are affected by chronic illness. This number is constantly increasing due to the ageing of the population and lifestyle changes.

Many chronic illnesses, through their impact on sexual function, whether biological, psychological or social, can alter the quality of interpersonal relationships and sexual satisfaction of both chronic illness patients and their partners.

So what is the impact of lack of desire on patients with chronic illnesses? What do they do to overcome these problems? Why and how does lack of desire manifest itself?

A survey was conducted, partly on Carenity, to which 71 people responded.

Find out what they had to say below!

As part of sociological research on the theme of "lack of desire, health and sexuality", an online questionnaire was distributed at the beginning of 2021 on the Carenity platform. It was also relayed on a few other health forums. This anonymous survey consisted of a series of open and close-ended questions, with multiple choice responses and spaces to express oneself freely or to complete the answers previously provided. The aim of the survey was to try to understand the role of "non-desire" in people's lives, its social and medical qualifications and impact, and the therapeutic approaches that can be offered. There were 71 respondents to this survey (45 women and 26 men aged between 18 and 78).

Read on to discover some of the survey's findings! 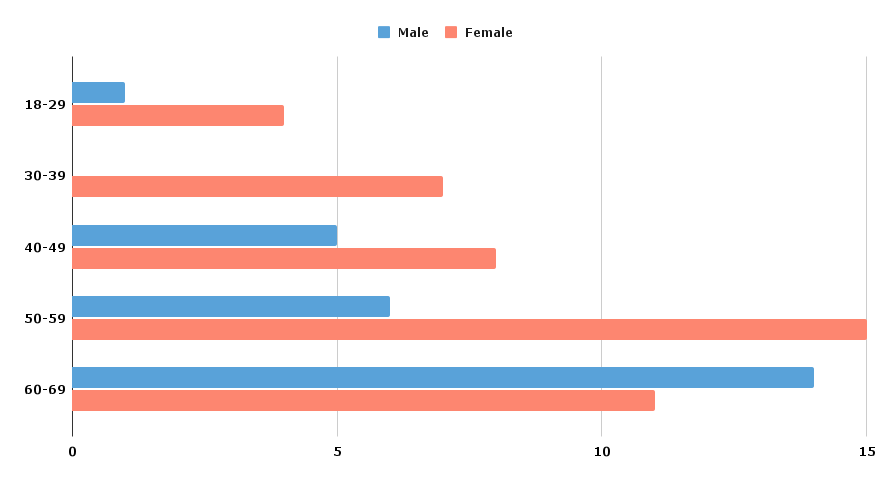 Given the average age of the female survey participants (compared to the males), it can be thought that the problem of lack of desire mainly affects younger women, or that they are concerned about it earlier than their male counterparts. The average age of the male respondents, which was around 60, may also be explained by the fact that the notions of "desire and lack of desire" are more often associated with erectile capacity, which tends to decline with age.

As the questionnaire was conducted on health forums, including Carenity, a large majority of respondents were affected by a chronic illness. For both men and women, depression, diabetes and hypertension are over-represented among the 71 respondents.

When completing the survey, 55 participants (77%) said they were in a relationship with someone. Forty-five of them (63%) share a home with their partner. The problem of sexual desire (or lack thereof) therefore arises mainly among people in a relationship.

A strong link between chronic illnesses, treatments, and lack of desire

Chronic conditions often involve fatigue and are treated with drugs that can alter any physical, and therefore sexual activity. In addition, 15 of the respondents reported having had one or more surgical procedures involving the genital or reproductive areas: vasectomy, prostatectomy or tubal ligation (female sterilisation), etc.The use of antidepressants was also questioned in this survey. 53.5% of respondents indicated that they currently take or have taken them in the course of their lives.

The results of another survey, the "Contexte de la Sexualité en France (CSF) " ("Context of Sexuality in France") survey, published in 2008, show that chronic depression and the use of medication play an important role in loss of libido. Indeed, among the male respondents who said they were affected by chronic depression, 36% said they "often" or "sometimes" experience lack of sexual desire. As for those who were taking tranquillisers, 37% "sometimes" experience loss of libido.* Chronic illnesses, which are extremely restrictive in their daily management, as well as mental health, are two important elements to take into account when talking about loss of libido. This loss can be the result of the disease itself, but can also arise from the difficulties in every day life; patients encounter professional, relational or marital problems, which tend to reduce their sexual desire even more, thus creating a vicious circle. *The results cited here are taken from the chapter on "sexual function difficulties" in the CSF survey.

Respondents have not hesitated to seek help for sexual and/or general health issues in the past. 60% of the women interviewed in the survey had already turned to therapy. Among them, 11 had seen a doctor for their depression, 4 for pain during intercourse, 4 for lack of libido or lack of satisfaction during intercourse, among other things. The healthcare professionals seen by the respondents were mainly psychologists, psychiatrists, and sexologists. Marital counselling, sophrology, and hypnosis were also mentioned, but to a lesser extent. 35% of the male respondents have also tried therapy, but for a shorter period of time than the female respondents. Urologists, psychologists, sexologists, GPs, and psychiatrists were among healthcare professionals seen. In addition, 49 respondents have already considered seeing (or have already made an appointment) a healthcare professional for their sex-related problem.

Different therapeutic options for men and women, and unsatisfactory results

A little over half of respondents (51.9%) said indicated that their past medical appointments did not go well, or only went moderately well. Only 25% said they had noticed an improvement due to treatments they had received. Respondents frequently expressed that the they felt that their lack of desire and their need to talk about it with a therapist was "shameful" or "too intimate". This suggests that self-esteem and fear of failure are central to respondents' concerns.

Overall, it can be said that there is a general "silence" and no doubt, a taboo, around this subject; treatment and care can be difficult or non-existent and are both relatively unsatisfactory. Healthcare professionals are not necessarily equipped to deal with problems that are more 'sexological' than medical or organic in nature.

The same observation, with different explanations, depending on the patient

The respondents, both men and women, who experience a loss of libido, explain it in the following way:

“I can't have a full erection anymore, and it's a real problem for my partners.”
Male, 56-years-old

“Mine is probably caused by repeated break-ups and losses, low self-esteem and health issues. Or possibly my age and anxiety due to frequent break-ups”
Female, 66-years-old

“Having multiple sclerosis doesn't help, I can't get it up."
Male, 50-years-old

“I've been in pain every time I have sex for the past 3 years."
Female, 21-years-old

"Mine is caused by chronic fatigue due to my illness."
Female, 56-years-old

"My lack of libido I think is from my medication for my prostate."
Male, 75-years-old

Where do you find the strength to fight substance abuse?