For one elementary school principal in Georgia, students and faculty are much more than just people she works with, they are family.

According to Patricia Cook, head of Union County Elementary School, they have helped push her to fight through one of her toughest battles.

In September, Cook was diagnosed with breast cancer. Within the first two months of her diagnosis, she underwent three surgeries and was hospitalized because of a serious infection.

"There's a lot of hard hoops for people to go through and it's an emotional battle every day -- and physical battle too,” Cook said.

On Jan. 9, Cook began radiation treatment. She continued to work at the school while receiving treatment but had to work in isolation.

Because her doctors were concerned about her compromised immune system and the possibility of her contracting another infection, Cook was confined to an office and had to avoid contact with any kids.

"I just love the kids so it was very hard to not be able to play with them and eat lunch with them," she said.

Some children missed seeing her so much that they passed notes under her door, serving as a much-needed reminder that they were thinking of her throughout this difficult time. 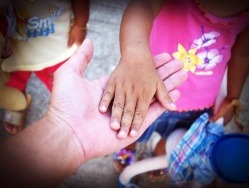 "We'll fight with her," 11-year-old student Jayden Rogers said of helping her principal get through this battle.

On Monday, students and staff at Union County Elementary School in Georgia, gathered to cheer on principal Patricia Cook as she went to her final treatment for breast cancer.more On Monday, Cook left work for her 33rd and final treatment appointment.

This time, though, she had the send-off of a lifetime. As her car rounded the corner of the parking lot, she was greeted by 600 students and faculty members cheering her on and waving posters in the air.

"It was very overwhelming to see that much support. The love. I'm very blessed. Very, very blessed," Cook said.

Cook said that many of her students have been touched by cancer.

One fifth-grader who'd lost her grandmother to breast cancer even made bracelets for Cook to keep her inspired.

On Tuesday, Cook returned to school.

"When you're down and out, kids can give you energy and strength that you never thought you had," she said, fighting back tears. "As I walked down the hall, I don't think I passed a single kid that didn't hug me."

During the next few weeks, Cook said she plans to visit every single classroom to discuss her journey with students and answer any questions they may have.

"The most important thing for the kids to get from this is that we have to be a team. We have to support each other. This is not about anything I did. It's about what they did for me," she said.