Anorexia nervosa is an eating disorder (ED) characterized by a relentless pursuit of thinness, distorted self-perception and restricted eating, leading to a very low body weight.

Worldwide, according to a systematic literature review carried out between 2000 and 2018,the lifetime prevalence of anorexia is 1.4% in women and 0.2% in men. These figures have remained stable over the past decades.

What is anorexia nervosa exactly? What causes it? How is anorexia treated? How can we overcome it?

Eating disorders (EDs) encompass a variety of mental health conditions, the most common of which are: anorexia nervosa, bulimia nervosa and binge eating disorder (BED). These disorders involve eating behaviors that are different from the norm. In general, these disorders are severe and long-lasting, with many psychological and physical consequences.

What is anorexia nervosa?

Anorexia nervosa is an eating disorder that typically begins in adolescence. It is most often triggered between the ages of 13 and 17, with a peak in prevalence at 16. However, it appears that the age of onset is getting younger and younger.

Anorexia nervosa may also occur earlier, from the age of 8, or sometimes later, after age 18.

In the US, 9% of the US population, or 28.8 million Americans, will develop an eating disorder in their lifetime. It is difficult to precisely measure prevalence rates of eating disorders, but recent studies have found that almost 1% of women and 0.3% of men will experience anorexia during their lives.

Anorexia diagnosis is based on precise clinical criteria taken from international classifications (ICD, International Classification of Diseases, and DSM 5, Diagnostic and Statistical Manual of Mental Disorders of the American Psychiatric Association). They are as follows:

Amenorrhea (absence of menstruation for at least 3 months) is another important clinical indicator. However, this indicator no longer appears among the diagnostic criteria for the disease since the 5th edition of the DSM because of the frequent use of estroprogestative oral contraceptives, which cause withdrawal bleeds (false periods) masking amenorrhea.

Slower growth in young adolescents may also be suggestive of anorexia. 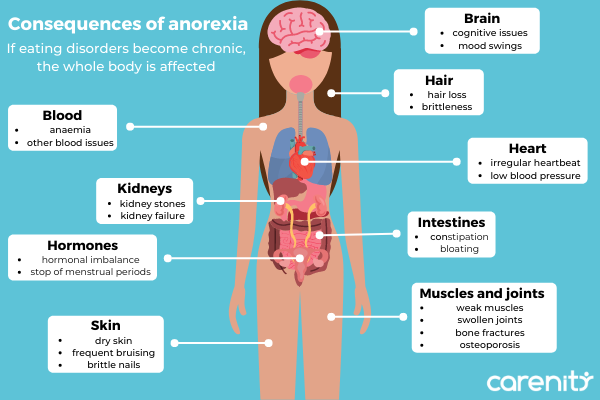 Anorexia leads to malnutrition, which is often accompanies by sensitivity of the extremities to cold, oedema, abnormal hair growth (fine hair all over the body), dehydration with dry skin, as well as brittle hair and teeth.

In addition, the body may enter a state of slowdown of vital functions (also called hypometabolism) with a drop in body temperature, a slowing of the heart rate and low blood pressure.

In severe malnutrition, all major organ systems in the body are likely to be affected. Bone density may decrease, increasing the risk of osteoporosis.

What are the causes of anorexia nervosa?

Anorexia nervosa is a multifactorial disorder that depends on individual genetic and psychological factors, in close interaction with environmental, familial and socio-cultural factors.

When the body reaches puberty, it undergoes rapid changes. Feeling uncomfortable in their new bodies and subject to social pressures, some adolescents may want to lose a few kilos quickly. Eating disorders can then appear on this fragile terrain, depending on the personality of each individual, the emotional environment and the eating habits already in place.

Apart from puberty, anorexia can sometimes occur as a consequence of dieting. The perception of the body changes and the person cannot stop losing weight. Due to the dieting process, the hunger and satiety mechanisms change under the effect of food deprivation and are therefore likely to amplify this phenomenon.

Relational and family difficulties may also play a role in the onset of anorexia. Indeed, young girls with anorexia often have highly dependent relationships with their mothers.

How is anorexia treated?

Treatment for anorexia is mainly based on psychotherapeutic care and nutritional education. Support provided must also be social and familial in nature. Cognitive and behavioral psychotherapy is often used to modify the anorexic patient's overall attitude towards food. These techniques allow the patient to take stock of their eating history, but above all of the image they have of their body and of their relational difficulties.

Treatment and support for anorexia begins with a consultation or hospitalization. The latter may be necessary in case of a life-threatening risk to the patient or in case of family exhaustion or failure of outpatient care.

The main short-term objective is a gradual normalization of weight and a return to a spontaneous, regular and diversified diet.

After 5 years of continuous effort and change, 2 out of 3 anorexia patients are considered in recovery. For the remaining third, their anorexia nervosa is considered chronic.

In the long term, half of those treated for anorexia nervosa in adolescence recover, a third are significantly improved, 21% suffer from chronic ED and 5 to 6% succumb to their eating disorder.

Anorexia nervosa: "I have always been into the extremes!"

Anorexia: “My eating disorder crept its way into my life.”

Supporting one another in eating disorder recovery

Really struggling with my ED, looking for support

How to improve our relationship with food?