Baking soda (sodium bicarbonate or NaHCO3), popularized by Arm & Hammer more than 150 years ago, is a staple in many homes for baking and cleaning purposes, but this inexpensive ingredient also has a number of medicinal uses and benefits. It rates right up there with hydrogen peroxide as one of the most inexpensive and safe health tools around, so it makes sense to learn all you can about the many uses of baking soda. 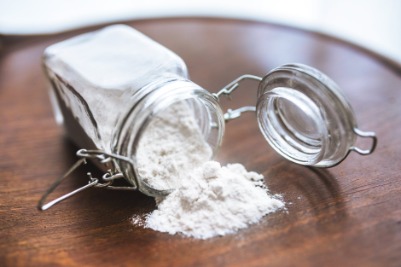 It is commonly known to have alkalinizing, antacid and electrolyte replacement properties. When taken internally, baking soda is thought to raise the pH of your blood. This appears to be the basic premise behind its recommended use against colds and influenza symptoms, recounted in a 1924 Arm & Hammer booklet on the medical uses of baking soda.

Taking one-half to 1 teaspoon or so of baking soda dissolved in a glass of water is also an inexpensive way to ease heartburn. Long-distance runners have also engaged in a practice known as “soda doping” — taking baking soda capsules — before races to enhance performance — a measure thought to work similarly to carbohydrate loading.

In this case, by increasing the pH of your blood, this practice is thought to offset the acidity produced in muscles during intense activity. While I do not suggest or recommend you try this at home, use of baking soda has also been shown to improve speed among swimmers.

Research has also shown drinking baking soda solution can help pregnant women who are having a slow or difficult labor to avoid C-sections in about 20 percent of cases by neutralizing acid in their womb. This could spell the difference between life and death in developing countries and/or instances where C-section is not an option.

Baking Soda May Be an Inexpensive Treatment for Autoimmune Diseases

Most recently, research funded by the National Institutes of Health suggests baking soda may be an effective treatment adjunct for rheumatoid arthritis (RA) and other autoimmune diseases. According to this study led by renal physiologist Paul O’Connor and published in The Journal of Immunology, drinking a solution of water and baking soda appears to prime your immune system against inflammation.

Although this study suggests some benefits from baking soda for rheumatoid arthritis, there are far more fundamental approaches that should be tried before this as detailed in “Inspiring Account of How to Put Rheumatoid Arthritis into Remission.” Additionally, one could avoid lectins for autoimmune diseases like RA.

The theory was initially tested on rats, and later in human subjects. According to O’Connor, baking soda may indeed be “a really safe way to treat inflammatory disease,” including arthritis. As reported by Medical News Today:

“Their experiments tell a complex story about how this salt provides a signal to a special kind of cell called ‘mesothelial cells,’ telling them that the body is fine and not under attack, rendering an aggressive immune system unnecessary. Thus, harmful autoimmune responses are averted. Mesothelial cells line the internal organs as well as many different cavities in the body …

Basically, in O’Connor words, mesothelial cells learn that ‘[i]t’s most likely a hamburger not a bacterial infection.’ So they, in turn, do not activate the spleen’s ‘army’ of macrophages, or white blood cells tasked with clearing up potentially harmful cellular detritus. ‘Certainly, drinking bicarbonate affects the spleen and we think it’s through the mesothelial cells,’ O’Connor explains.”

Mesothelial cells are found in your blood and kidneys, and baking soda is already used in the treatment of chronic kidney disease. It was this that led the researchers to explore the mechanisms by which baking soda benefits renal function, slowing the progression of kidney disease. It was during this investigation they noticed that baking soda shifted the balance of immune cells in the kidneys, boosting anti-inflammatory immune cells while simultaneously decreasing inflammatory cells.

Further tests revealed baking soda has the same anti-inflammatory effect on blood and spleen as well. But how does it do this? Mesothelial cells, which line your internal organs, communicate with the organ in question via microvilli that emit a neurotransmitter called acetylcholine, and this appears to be an important part of the equation.

Eventually, they realized the inflammatory response is being mediated via acetylcholine signals through the microvilli connecting the mesothelial cells and the organ they line. The anti-inflammatory response triggered by drinking baking soda-infused water was found to continue for a minimum of four hours. As explained by the authors:

Our data indicate that oral NaHCO3 activates a splenic anti-inflammatory pathway and provides evidence that the signals that mediate this response are transmitted to the spleen via a novel neuronal-like function of mesothelial cells.”

Considering the devastating side effects inherent with rheumatoid arthritis drugs, the idea that something as safe and inexpensive as baking soda water may alleviate the inflammation driving this and other autoimmune diseases is as welcome as it is intriguing. Indeed, the drugs commonly prescribed for rheumatoid arthritis are among the most dangerous on the market.

These include prednisone, TNF-alpha inhibitors (sold under brand names such as Humira, Enbrel and Remicade. Side effects of these drugs include infection and an increased risk for cancer), and harsh anticancer drugs like methotrexate. Chronic use of nonsteroidal anti-inflammatory drugs and analgesics like Tylenol can also result in life-threatening liver and/or kidney damage.

Acetaminophen is actually the No. 1 cause of acute liver failure in the U.S. It’s tragic that conventional medicine doesn’t promote lifestyle changes before drugs for arthritis as, in my own practice, about 80 percent of my arthritic patients were able to achieve significant improvement or complete remission simply by following my nutritional and lifestyle recommendations.

In 2015, I interviewed a former patient of mine, Sarah Allen, about her successful remission. You can review that interview, and a summary of the most important lifestyle changes required to control this condition, in “Inspiring Account of How to Put Rheumatoid Arthritis Into Remission,” hyperlinked earlier.

Other Medicinal Uses for Baking Soda

In addition to the examples given at the beginning of this article, baking soda can also be beneficial for a number of other conditions and ailments, including the following. Keep in mind, you do not need to seek out aluminum-free baking soda, as all baking soda is aluminum free. The aluminum issue is related to baking powder, some brands of which may contain aluminum sulphate.

I have personally recommended this to many, including family members, and have been surprised how remarkably effective it is. This would make sense, as the baking soda works as an antacid in your gut, neutralizing stomach acid. In fact, the active ingredient in many over-the-counter (OTC) antacids is just baking soda.

Dosing is typically one-half to 1 teaspoon of baking soda in a full glass of water. Make sure the baking soda is completely dissolved in at least 4 ounces of water, and sip it slowly to avoid gas formation. Also keep in mind that excessive dosages can cause acid rebound, thereby making your symptoms worse. This is the same problem posed by OTC antacids.

Add 1 tablespoon of baking soda to a small glass of water, then soak the affected area twice a day. Many splinters will come out on their own after a couple of days of this treatment.

Add one-half cup of baking soda to lukewarm bathwater, then soak in the tub for natural relief. For added relief, let your skin air dry rather than toweling off the excess baking soda. You can also add a mixture of baking soda and water to a cool compress and apply it to the sunburn directly.

If you want to avoid the parabens and aluminum found in many deodorants and antiperspirants, try a pinch of baking soda mixed with water instead. This simple paste makes an effective and simple natural deodorant.

For an effective tooth and gum paste, use a mixture of six parts baking soda to one part sea salt. Place them in a blender and mix for 30 seconds, then place in a container to use. Wet the tip of your index finger and place a small amount of the salt and soda mixture on your gums. Starting with the upper outside gums and then the inside of the upper, followed by the lower outside of the gums then the lower inside, rub the mixture onto your teeth and gums.

Spit out the excess. After 15 minutes rinse your mouth. This mixture is incredibly effective at killing bacteria. For a natural way to whiten your teeth, crush one ripe strawberry and mix it with one-half teaspoon of baking soda. Spread the mixture onto your teeth and leave on for five minutes. Then brush your teeth as usual and rinse. This method should be used no more than once a week, as excessive use could potentially damage your tooth enamel.

Apply a paste made of baking soda and water to insect bites to help relieve itching. You can also try rubbing the dry powder onto your skin. This is also effective for itchy rashes and poison ivy.

Add 3 tablespoons of baking soda to a tub of warm water for an invigorating foot soak.

A paste made from three parts baking soda to one part water can be used as an exfoliator for your face and body. It’s natural, inexpensive and gentle enough to use every day.

Baking soda and apple cider make a wonderful spa-like bath for soaking away aches and pains and detoxing. As a bonus, it also cleans the tub and drain.