The gut-brain connection: What is it and how does it work?

Regularly referred to as the "second brain", the intestine plays an active role in both physical and mental health. The gut contains thousands of neurons and is in constant communication with the brain. Until now, scientists thought that this communication was only induced in one direction, from the brain to the intestine. Many researchers and doctors are now trying to demonstrate that this relationship can be established in both directions.

But how does the relationship between the gut and the brain work? What is the gut microbiota and what is its role? What are the consequences of a dysfunctional gut on our health? How can we take care of our gut?

What is the gut microbiota?

The intestinal microbiota, commonly referred to as the gut flora, is home to a huge number of micro-organisms: bacteria, viruses, parasites and non-pathogenic fungi.

There are many different microbiota in the body: in the skin, the mouth, the vagina, etc.

The intestinal microbiota is the most important of these with 1,012 to 1,014 micro-organisms: 2 to 10 times more than the number of cells that make up our body, making up about 2 kilos of weight! It is a reservoir of enzymatic activity essential for human digestion and physiology. As such, it influences health. 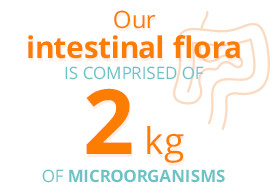 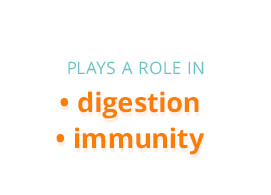 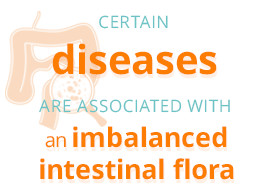 The intestinal microbiota plays a key role in digestion. It breaks down complex foods that our body cannot digest on its own, such as the vegetable fiber contained in fruit, vegetables and cereals, but also pectin and certain starches. Various bacteria intervene in turn and transform them into molecules that are indispensable to humans. Thus, if the diet is not varied and rich enough in fiber, the microbiota loses its own richness.

Moreover, the intestinal microbiota protects the individual against pathogens by "dialoguing" with the immune system. In fact, in a new-born baby, whose immune system is immature, the microbiota, as it gradually settles in, will enable the body to distinguish between microorganisms that can be described as "friendly" and pathogens.

Other research has highlighted the role of the microbiota in other functions of the body: satiety, sensitivity to stress, growth, pain control, etc.

What is the link between the microbiota and certain illnesses?

When the microbiota's composition or function is disturbed, a state of dysbiosis (also called dysbacteriosis) occurs. This can be caused by an antibiotic treatment, for example, but the balance is generally restored fairly quickly.

When the dysbiosis becomes chronic, it may be linked to a health condition such as chronic inflammatory bowel disease (IBD). The microbiota of patients with fewer bacteria could aggravate the condition. The same observation has been made with obesity. Indeed, some patients have a disturbed microbiota with a loss of diversity, an excess of deleterious micro-organisms and/or a deficiency of beneficial micro-organisms.

Why is it said that the gut microbiota is our second brain?

The role of the gut microbiota is not limited to digestion. Numerous studies have shown that it has many links with the brain. A Belgian study, published in the scientific journal Nature Microbiology, suggests that certain types of gut bacteria may have an impact on quality of life and may even be linked to depression.

The gut is home to 200 million neurons that are in constant communication with the neurons in the brain. Intestinal bacteria could therefore influence our behavior (stress, anxiety, depression, etc.) and could also be involved in certain nervous system diseases. Thus, a depressive state could be linked to an imbalance in the intestinal microbiota.

In addition, other studies show that the intestinal flora can play a role in weight and more particularly in the reasons why individuals gain or lose weight.

A number of studies have been carried out on mice. It was found that if the mice were fed bacteria that are common in obese people, they would gain weight. Conversely, when bacteria from slim people were introduced into the diet, the mice lost weight.

Doctors are now trying to determine the true nature of the link between the gut microbiota and the brain.

How to take care of your gut microbiota?

Scientists are considering several therapeutic approaches for diseases triggered or maintained by dysbiosis. They can be implemented alone or in combination and are as follows:

According to a few studies, the composition of the intestinal microbiota could influence the effectiveness of certain anti-cancer therapies. Indeed, the absence of certain micro-organisms in the microbiota of certain patients could explain why they do not respond to treatment.

This research could open up new diagnostic and therapeutic perspectives by modifying the intestinal microbiota of patients who do not respond well to treatment.

The food now days is what causes problems . Back in the day people are from good grown food with no preserves and chemicals .

March 26th I started on gut friendly plan eating only foods to benefit and heal my  gut .got rid of processed foods.sugar.wheat,gluten ,potatoes,pasta,rice,salt,and cheese.i eat only fermented dairy.onions,scallions,garlic,asparagus,eggs,fish,whole foods.A video I watch advised a few tips..chew food to liquid ..Also eat fermented foods daily..kefir has a different bacteria than buttermilk..so is good to drink both.learn to like unflavored unsweet.

The only sweetner your body can handle properly is raw honey.raw pure maple syrup.and stevia .

I have already cut my insulin and bp meds in half since eating clean.

Because I want to loose weight  3 weeks ago cut my portions to size they would be if I had bariatric surgery. 1 cup per meal total. Max cal per day 1500 .goal protien min 70.carbs under 50 day..I average 30.