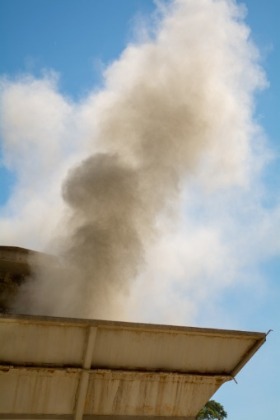 High levels of air pollution are linked to an increased risk of mouth cancer (oral cancer), new research has revealed.

Scientists have previously linked high air pollution to a host of health problems, from an increased risk of dementia to asthma and even changes in the structure of the heart, with recent research suggesting there is no “safe level” of air pollution.

Now researchers say that at very high levels of air pollution, the risk of developing oral cancer appears to rise.

Writing in the Journal of Investigative Medicine, researchers in Taiwan describe how they discovered the association by looking at air pollution data from 66 air quality monitoring stations around the country collected in 2009, and combing this with data from the health records of more than 480,000 men aged 40 and over from 2012/13. In total, there were 1,1617 cases of oral cancer among participants.

The team focused on tiny particulates of pollution known as PM2.5s, and took the men’s exposure to this air pollution as being based on where they lived. They then sorted the participants into four groups, from lowest to highest levels of exposure.

After taking into account factors including age, exposure to ozone, levels of other particulates, age, smoking status and whether the men chewed betel quid – a mixture of ingredients that includes areca nut and betel leaf and is known to increase the risk of oral cancer – the researchers found that men exposed to the highest levels of PM2.5s had an increased risk of oral cancer.

Compared with men exposed to average annual PM2.5 levels of 26.74 micrograms (μg) per cubic metre (m3) of air, those exposed to concentrations of 40.37 μg/m3 or higher had 43% greater odds of developing the disease.

“The mechanism through which this occurs is not clearly understood, hence further investigations are required,” the researchers write.

The World Health Organisation (WHO) has previously said average annual levels of PM2.5s should not exceed 10 μg/m3. While in central London the average annual figures have been found to be double this, they are still far lower than the highest levels seen in the Taiwanese study.

However, many other cities around the world have extremely high levels of air pollution. According to figures from the WHO, the average annual level of PM2.5s in Kabul is 86 μg/m3, while in Beijing it is 85 μg/m3 and in Delhi it has been recorded at 122 μg/m3.

But the study has limitations, including that it is does not consider the men’s previous exposure to air pollution over their lifetime – which may have been higher or lower than their recent exposure.

Prof Frank Kelly, chair in environmental health at King’s College London, who was not involved in the study, said it would be useful to explore whether a link between oral cancer and air pollution is seen in other countries.

“Air pollution has previously been linked with several types of cancer, including breast cancer, liver cancer, lung cancer and pancreatic cancer. It is therefore not surprising that this new study in Taiwan has made a possible link with oralcancer,” he said. “However, given that air pollution concentrations and smoking incidence are much lower in the UK and we don’t chew betel all suggest that the increased risk of developing oral cancer may be unique to Taiwan.”