Endocrine disruptors: What is their impact on our health?

The functioning of the human body depends on the work of different biological systems that consist of cells, tissues and organs, and which have one or more common functions; there are the respiratory, digestive, nervous and other systems. Among these systems there is the endocrine system, which is made up of endocrine glands that secrete chemical substances called hormones.

When this system is disrupted, the production of hormones becomes abnormal and prevents the coordination and regulation of certain essential functions of the human body.

But what can disrupt the endocrine system? Which substances are responsible for this disruption? What are the effects of endocrine disruptors?

Find all the answers in our article!

What is the endocrine system?

The endocrine system is made up of endocrine glands, a group of cells specialized in hormone secretion, which produces chemical substances and releases them into the bloodstream, thus affecting the functioning or development of other organs. 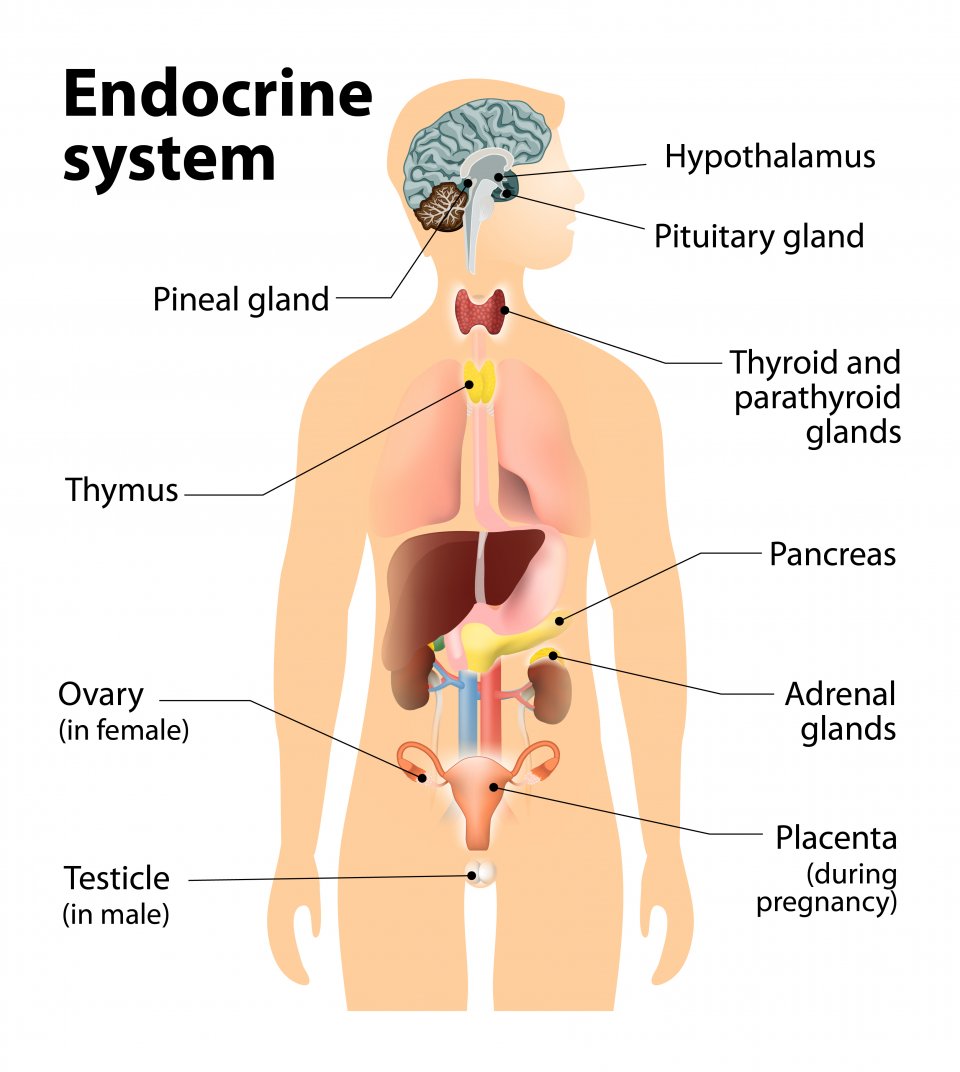 Not all organs that secrete hormones or hormone-like substances are considered part of the endocrine system. For example, the hormones of the digestive system are used to regulate digestion.

Also, not all glands in the body are endocrine: there are also sweat, salivary and mammary glands. These glands secrete substances other than hormones and release them into the ducts, not directly into the bloodstream. They are called exocrine glands.

The pancreas is both an endocrine and an exocrine gland, part of which is used to produce insulin and other hormones that are released into the bloodstream to regulate blood sugar levels, and the other part is used to release digestive juices into the pancreatic duct and then into the small intestine.

The endocrine system enables the body to carry out certain essential functions such as: reproduction and embryo development, growth and development of the body, production, use and storage of energy, maintenance of water and salt balance in the body and response to stimuli.

Here are some of the hormones secreted by the endocrine system:

What is endocrine disruption?

The endocrine system is considered to be malfunctioning when a disruptive substance stimulates or inhibits it, thus producing decreased or increased amounts of hormones.

The function of a hormone is to transmit a chemical message to a cell receptor, but if a disruptive substance is present, this substance can: mimic or prevent the action of a natural hormone, or disrupt the production, transport, elimination or regulation of a hormone or its receptor.

Such disrupting substances are called endocrine disruptors. According to the WHO, an endocrine disruptor (ED) is a "chemical substance or mixture that alters function(s) of the endocrine system and consequently causes adverse health effects in intact organisms or their progeny or sub-populations".

Thus, an ED is a substance that is foreign to our body, and may be of synthetic or natural origin.

The effects of EDs are complex, they can add up, reinforce or, on the contrary, inhibit each other. Moreover, these effects are not necessarily linked to the dose received by the individual.

To be qualified as an endocrine disruptor, a substance must cause a harmful effect or a disorder in the human's body, so not all substances with endocrine activity are necessarily disruptors. Similarly, a substance that is toxic to an organ but not to the endocrine system is not considered an ED.

What are the effects of endocrine disruptors on our health?

The main sources of exposure to EDs are water and food, but also air and cosmetics. People can be exposed through multiple routes, such as ingestion, inhalation and skin contact, to minute doses of several compounds, the effects of which may vary and can be combined.

Estimating the effects of EDs on human health is difficult because their mechanisms of action are not yet clearly understood. For example, there is the question of adverse effects of these substances maintained through several generations. The WHO estimates that 23% of global mortality is related to the environment.

In order to detect these disorders and diseases, blood, urine and saliva tests must be carried out to determine the quantity of hormones present. It is also possible to measure the element that these hormones should control, such as the blood sugar level. It can be also useful to visualize the gland in question, by means of an ultrasound, a scanner or an MRI, or by scintigraphy.

In case of insufficient hormone secretion, possible conditions include adrenal insufficiency, hypothyroidism and dwarfism. In order to treat them, hormone replacement therapy is necessary to provide the missing substance on a daily basis.

In case of excessive secretion, such diseases as acromegaly or hyperthyroidism may develop. Treatment options include drugs that inhibit hormone synthesis (hormone therapy), surgery (removal of all or part of the gland), or gland destruction (e.g. radiotherapy).

Certain reproductive and neurological disorders, autism, decline in IQ, or metabolic disorders such as diabetes insipidus or insulin-dependent diabetes or obesity, are also suspected to be associated with exposure to endocrine disruptors.

What can be done to reduce the impact of endocrine disruptors?

People are increasingly aware of the major health and environmental issues linked to endocrine disruptors, especially as they are found in many everyday objects and products.

There are several things we can do to reduce the impact of endocrine disruptors on our health: 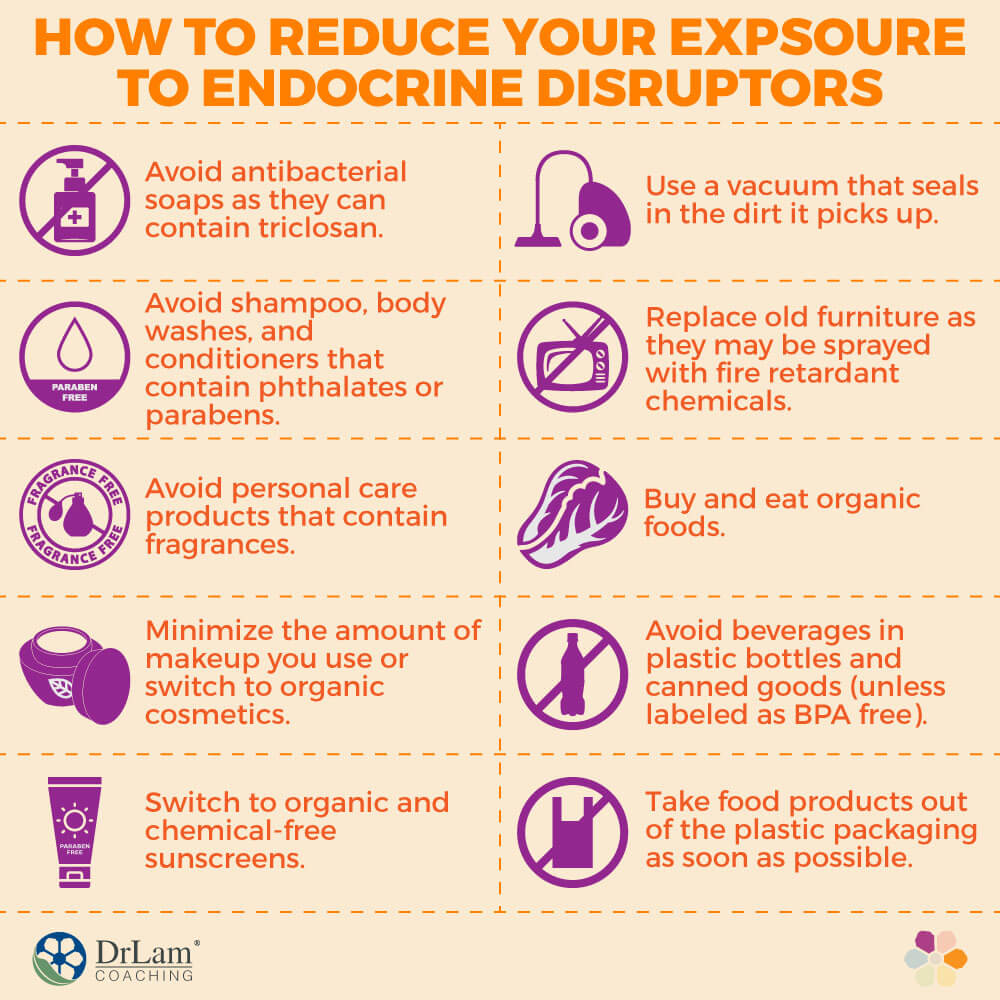 In all developed countries, there has been an increase in the number of chronic diseases and other disorders, for which the environmental factor is considered to be the main cause. This represents a considerable cost for the countries' health care systems.

In this context, the mobilization of all stakeholders (governments, communities, associations, professionals) is essential. Several strategies have been adopted in order to address the issue; you can find information on the latest updates on the National Institute of Environmental Health Sciences website. All the actions taken and planned have several common objectives, such as providing training and information on EDs, protecting the environment and the population, and improving our understanding of EDs.

I find it interesting that NSAIDs and aspirin is listed, as many with chronic conditions takes these OTC to help with pain management.

Also was a concern that Vehicle exhaust was not included, before 1975 lead was a major ingredient in gas, they removed that an add many other chemicals, I wonder how many of those may contribute.

as one who has experienced an endocrine tumor, I would have like to know if maybe some of what the article is talking about had any influence in development of the tumor.

but hey we know more now then 10 years ago

Where do you find the strength to fight substance abuse?