COVID-19: Everything you need to know about the virus and the different variants!

To shed some light on this complex subject, we thought we would share an article with you on COVID-19 and its different variants.

What is a variant? How are the COVID-19 variants different from each other?

Viruses, in general, are infectious agents that must penetrate a cell in order to replicate. Although they all share this characteristic, there are many differences between each family. For example, there are enveloped viruses and naked viruses, DNA viruses and RNA viruses, etc. However, all of these viruses all infect their target cell and divert the latter's processes towards the production of new viruses, called virions.

How does the COVID-19 virus function?

The SARS-CoV-2 virus, responsible for COVID-19 (coronavirus disease 2019), belongs to the beta group of the coronavirus family. The latter is also responsible for other epidemics that occurred in Asia in 2003 (SARS-COV-1 epidemic) and 2012 (MERS).

SARS-CoV-2 is an enveloped virus, meaning that it has an envelope (of cellular origin) surrounding its genetic material. The genetic material consists of a single positive strand of RNA. This means that when the virus infects a cell, its RNA strand can be directly translated into protein by the cellular machinery. As a result, the cell can no longer perform its physiological functions (due to the production of viral proteins) which, among other things, causes the problems associated with the disease.

The genome of this virus codes for 20 proteins, 16 of which are non-structural proteins that allow the hijacking of the cellular machinery, the production and maturation of viral RNA.

The remaining 4 proteins are structural. There are the E and M proteins, for "envelope" and "membrane" respectively, the N nucleoprotein which protects the viral RNA and finally the S protein for "Spike". The E, M and S proteins form the envelope. 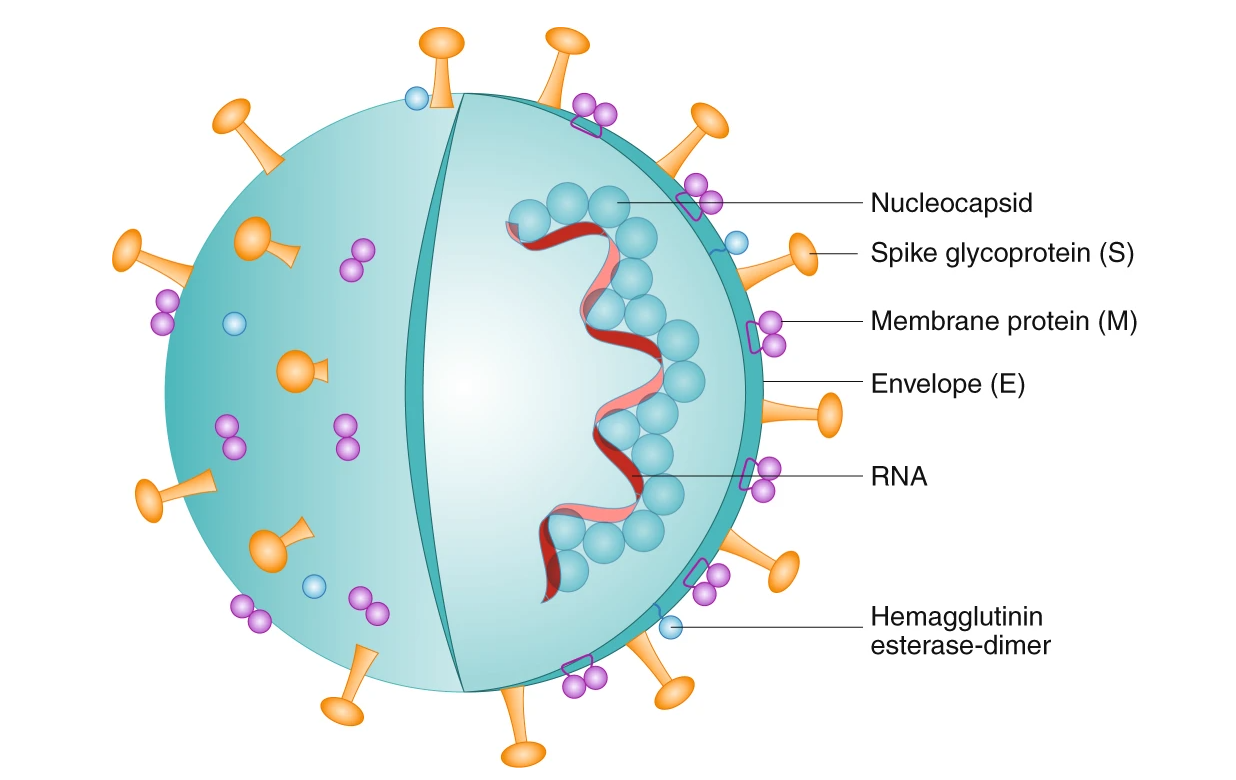 It is also thanks to a protein that this virus penetrates cells. Indeed, the S protein allows, via its binding to a receptor (ACE2), the penetration of the virus inside the host cell. Indeed, after the ligand binds to its receptor, the cell membrane internalises the virus in an endosome which then releases the virus' RNA.

These ACE2 receptors are found in lung, kidney, liver, heart and intestinal cells, which explains the many different types of SARS-CoV-2 symptoms (digestive and heart problems, kidney failure, shortness of breath, etc.). Furthermore, ACE2 has many similarities with the nicotinic acetylcholine receptor found in the nervous system. This could explain the neurological symptoms of the disease such as anosmia (loss of smell) and agueusia (loss of taste).

Why are there variants of COVID-19?

The variants are due to mutations in the virus genome. All viruses mutate. Indeed, during each reproduction mutations appear, there are substitutions, insertions, deletions and duplications. However, the vast majority of these mutations have no effect.

In the case of SARS-CoV-2, the mutations that cause the variants affect the S protein. The S protein is not only responsible for virus internalisation, but is also the target of natural or vaccine immunity. Today, there are nearly 4000 mutations in the Spike protein. A virus whose mutation modifies an important characteristic of the virus (severity, symptoms, ability to infect, etc.) is called a "variant". 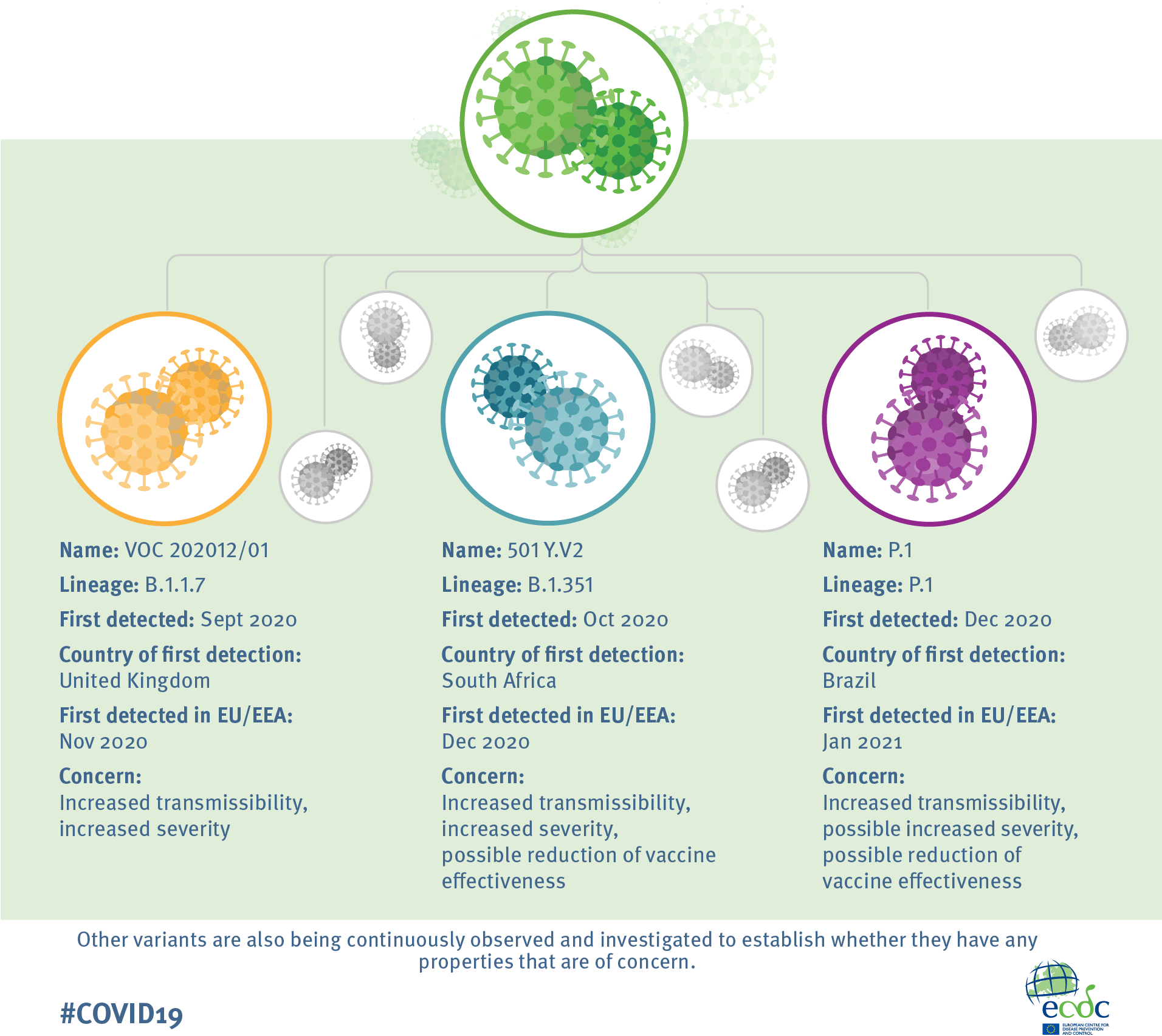 What are the differences between the variants?

The UK variant has 19 notable mutations, 8 of which are in the S protein. Among them, the N501Y mutation slightly modifies the tip of the protein, thus facilitating its binding with its ACE2 receptor. It therefore allows the virus to be more easily transmissible. However, a recent Harvard study appears to show that the increased transmissibility of this variant could be due to a higher viral load during infection.

A second notable mutation is the P681H mutation which is thought to increase the production of S protein.

The vaccines currently on the market are thought to provide sufficient protection against this variant.

According to the CDC, the vast majority of new cases (around 73.8%) in the US are caused by this variant at present.

This variant has 13 main mutations, 8 of which are on the S protein. These include N501Y again, but also K417N. The latter mutation is thought to have the same effects as N501Y (increased transmissibility). We also note the appearance of the E484K mutation. This mutation also modifies the S protein, but this time the consequence is a potential ability to get around some of the protection offered by natural and vaccine immune responses. Indeed, according to studies, the Novavax and Johnson & Johnson vaccines have shown lower efficiency in South Africa.

In contrast, the neutralizing capacity of the mRNA vaccines (Pfizer and Moderna) is only reduced by 30%. According to immunologists, this reduction should not have any consequences because of the high initial protection rate of mRNA vaccines (over 90%).

According to the CDC's COVID-19 variant tracker, the South African variant accounts for only 0.6% of current cases in the US. There is no evidence of increased mortality from this virus. Concerns are now focused on resistance to immunity, in particular that provided by a previous infection with COVID-19.

According to CDC data, the Brazil variant makes up 9.6% of new COVID cases in the US..

These variants (B.1.427 and B.1.429) carry the L452R mutation on the S protein, which is thought to facilitate its transmission. Having first been observed in Denmark in the fall of 2020, by January 2021, the California variants made up 35% of all cases in the state and 44% of all cases in Southern California. In recent weeks it has been overtaken by the UK variant once again.

The CDC reports that these two strains account for only 0.5% and 0.2% of cases, respectively.

In summary, there are many mutations in the virus that causes COVID-19. Some of them could limit the effectiveness of vaccines, although nothing is certain at the moment. The more a virus circulates, the more it will mutate. It is therefore important to limit its circulation. This is where vaccines come in.

Was this article helpful to you?
Share your thoughts and questions in the comments below!
Take care!