Could 'one puff' of cannabis ease depression?

A new study sheds light on how different quantities of tetrahydrocannabinol and cannabidiol — the psychoactive compounds in cannabis — affect levels of stress, anxiety, and depression. 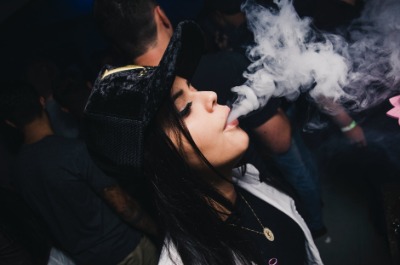 Researchers reveal how different concentrations of cannabinoids might impact anxiety, stress, and depression.
Researchers from Washington State University (WSU) found that adults reported a reduction in depressive symptoms with just a single puff of medical marijuana that was high in cannabidiol (CBD) and low in tetrahydrocannabinol (THC).

The team also found that at least 10 puffs of marijuana high in both CBD and THC led to significant reductions in self-reported stress, while two puffs of cannabis with any level of CBD or THC led to a reduction in anxiety.

However, the study also found that long-term use of medicinal marijuana may actually exacerbate symptoms of depression.

Lead study author Carrie Cuttler, of the Department of Psychology at WSU, and colleagues recently reported their results in the Journal of Affective Disorders.

Alleviation of anxiety, stress, and depression are the among the most common reasons why people use cannabis, but does the drug really work? To date, the few studies that have attempted to answer this question have produced mixed results.

"Existing research on the effects of cannabis on depression, anxiety, and stress are very rare," says Cuttler, "and have almost exclusively been done with orally administered THC pills in a laboratory."

Studying data from a cannabis app
For this latest research, Cuttler and colleagues set out to investigate how different concentrations of THC and CBD in cannabis affect users' symptoms of anxiety, stress, and depression when inhaled.

THC and CBD are the two most common cannabinoids — which are chemical compounds that act on cannabinoid receptors in the brain — found in cannabis.

"What is unique about our study," Cuttler explains, "is that we looked at actual inhaled cannabis by medical marijuana patients who were using it in the comfort of their own homes as opposed to a laboratory."

To reach their findings, Cuttler and team analyzed data from Strainprint, a Canadian app used to track medical cannabis use and the symptom severity of almost 280 medical conditions.

For this study, Cuttler and colleagues assessed around 12,000 entries of adults who used the app to track symptoms of anxiety, stress, and depression.

Users of the app reported their gender, method of cannabis use, quantity of cannabis use (such as the number of puffs taken when smoking the drug), and the percentage of THC and CBD in their cannabis.

Around 20 minutes after drug administration, users are required to report symptom severity on a scale ranging from 1–10.

Chronic use may worsen depression
Overall, users reported that their symptoms of depression halved as a result of medical cannabis use, while symptoms of anxiety and stress were reduced by 58 percent.

On looking at how the concentrations of THC and CBD affected symptom severity, the team found that just one puff of high-CBD, low-THC cannabis was enough to lower depressive symptoms, while two puffs of any form of cannabis were tied to a reduction in anxiety.

For symptoms of stress, at least 10 puffs of high-CBD, high-THC cannabis produced the greatest benefit.

According to the researchers, these findings contradict popular notion that THC is the most beneficial cannabinoid for mental health. "A lot of consumers seem to be under the false assumption that more THC is always better," says Cuttler.

"Our study shows that CBD is also a very important ingredient in cannabis and may augment some of the positive effects of THC."

What Are Your Thoughts?

I tried CBD oil, but it did not do much for my clavicle/collar bone pain or my nerve pain into my arm.

Wow, I'm really amazed of the effective part of this chemical structure without harm! For example people use THC free like https://baeys.com because its positive effects. Many has depression and seek cure, sometimes it’s a chemical thing. But, I’m really OK with it, because it has effective. Sometimes I had pain when just standing. Now that pain is gone. I would advise it to all, check information on google and purchase without doubt. Effects are on the same day. Even more people need to know about its positive effects, I’m happy something appeared like that. Good luck!

Borderline personality disorder: everything there is to know!

Interpersonal Therapy for Bipolar Disorder: Is it effective?

Does religion help you cope or hurt you in your treatment for bipolar disorder?

Morning anxiety - Any recommendations? Let's share our tips and tricks!