Panic attacks: What are they and how to cope?

Occasional anxiety is a normal part of life. However, when that anxiety impairs your ability to function in the day-to-day, it may be classified as an anxiety disorder. Anxiety disorders often involve repeated episodes of sudden feelings of intense anxiety, fear, or even terror that can last for minutes, called panic attacks.

What are panic attacks? Are they different from anxiety attacks? What causes them? How to prevent and treat them?

We answer these questions and more below!

What is a panic attack? Are they different than anxiety attacks?

Panic attacks are the primary symptoms of panic disorder, but can occur with other mental health conditions, such as anxiety disorders, which include generalized anxiety disorder (GAD), panic disorder, phobias, and separation anxiety. Panic attacks are characterized by an abrupt surge of a variety of emotional, physical, and cognitive symptoms that can feel uncontrollable and overwhelming.

The terms “anxiety attack” and “panic attack” are often used interchangeably. Though they do share some common symptoms, in practice anxiety and panic attacks have different features and signs.

The Diagnostic and Statistical Manual of Mental Disorders (DSM-5) does not reference anxiety attacks but does define anxiety as a feature of several common mental illnesses classed under the heading of anxiety disorders. Anxiety is usually linked to the anticipation of a stressful situation or event and tends to build up gradually. This lack of diagnostic recognition of anxiety attacks leads the signs and symptoms to be open to interpretation.

The DSM-5, however, does recognize panic attacks, categorizing them as expected – meaning they are triggered by external stressors, such as phobias - or unexpected – meaning that they have an unknown or unobvious trigger. Panic attacks can occur as an isolated incident, but having regular, or multiple occurrences can be a sign of panic disorder.

Panic and anxiety attacks can feel similar and can even occur at the same time. For example, a person may experience anxiety about an upcoming test at school or presentation at work, and when the day arrives, this anxiety may peak with a panic attack.

According to the DSM-5, a panic attack is characterized by four or more of the following symptoms:

Panic attack symptoms generally peak within 10 minutes and subside, though some attacks may last longer or occur repeatedly.

Inversely, anxiety intensifies over time and has a strong correlation with excessive worry over a potential danger, whether real or perceived. If this worry builds up and the stress response escalates to a level where it becomes overwhelming, it may feel like an “attack”.

>> Read our article about how anxiety affects the body: Anxiety: What is it and how does it affect the body? << 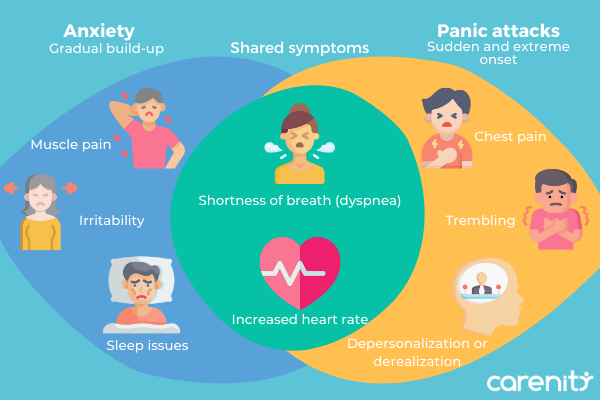 As mentioned above, panic attacks can be caused by a particular trigger, or can have no apparent cause.

A person is more likely to experience a panic attack if they:

Panic attack triggers tend to vary from person to person and in some cases, there may be no obvious trigger. However, many patients find that the following situations can cause an attack:

Can panic attacks be prevented? How to manage them?

As with many mental health conditions, some of the most common treatment options for panic attacks are counseling or psychotherapy, prescription medications, self-help strategies, or a combination of the three.

Some people find they can manage their attacks on their own by avoiding specific triggers, but this may not always be possible or appropriate, depending on the trigger and the situation.

While panic attacks cannot always be avoided, here are a few tips that can help you to get through them:

While this may seem simple, oftentimes panic attacks come from triggers in the environment around you, filled with stimuli. During an attack, close your eyes to shut out any triggering stimuli that may make the attack worse. This can help you to focus your thoughts on your breathing.

Respiratory symptoms like shortness of breath or hyperventilation are common during panic attacks and can increase the feeling of fear. A study published in the journal Frontiers in Psychology in 2017 found that deep breathing (also called diaphragmatic breathing) helped improve patients’ emotional well-being and lower cortisol levels (and therefore stress).

By controlling your breathing, you can help control the hyperventilating that can make panic attacks worse.

Imagine your breathing following this visual:

GIF courtesy of Hers

Another overwhelming symptom of a panic attack can be a feeling of separation from reality or your environment. Mindfulness techniques focus on focusing your attention on the present, acknowledging your current emotions, and meditating to reduce stress and ease yourself into a more relaxed state.

>> To learn more about mindfulness, read our article here: Mindfulness: How can it benefit our health? <<

Repeat a mantra in your head

Having a mantra, a word or phrase repeated to help concentration during meditation, can be calming and reassuring during a panic attack, as it gives you something to listen to beyond your breathing.

Whether it’s something simple like “It’s ok”, “This too shall pass”, or something more personal to you, repeat your mantra in your head on a loop until you feel yourself calming and the panic attack subsiding.

If anxiety or panic attacks are affecting you in your daily life, make sure to speak with your doctor or another mental health professional. He or she should be able to help you find the best prevention and treatment options for you.

Having a treatment plan you can follow when faced with a panic attack can arm you with the tools to help you get through an attack and take an active role in managing your mental health!

Panic attacks are hard to deal with especially if you don't how to cope with them. Or how to get over them especially when your by yourself the key is distraction distraction, always distract yourself whether it's solving a math problem or a riddle. Try finding something that will take a long time to do. I don't like math or riddles. But I do love music I normally listen to music and it helps me get through my day or a tough times. I listen to music everyday. Whether it's at home or walking to a store or going on a walk or just even in a car or sometimes at work. If they let you do it .the key is distract your mind and brain and remember to just breathe.

What is empty nest syndrome?

Impact of Social Media on Depression

How to travel with type 2 diabetes?

Side effects from Carbimazole and Propylthiouracil for hyperthyroidism