Pancreatic cancer: “The chances of survival after surgery were 17%!”

Kawacaroline, a member of the Carenity community in France, has been diagnosed with pancreatic cancer. After going to the doctor for a backache that wouldn't go away, the verdict was in. The specialists told her that her survival rate after surgery was 17%.

She fought hard and is now cancer free and enjoying life to the fullest 15 years after her operation!

Hello kawacaroline, thank you for agreeing to share your story with us on Carenity!

My name is Caroline, I am 63 years old, married and mother of 2 sons who are now 24 and 28 years old. We live in Waterloo, Belgium.

I was diagnosed 15 years ago at the age of 48. My children were 9 and 13. I was Head of Personnel in a large international company.

My husband was mildly disabled, so he stopped working shortly before I was diagnosed and I took care of everything: work, bills, shopping, dinner, housework, etc.

My husband took care of driving our children to the basketball club where they both played. I didn't have much time for myself as there were games on the weekends and during the week, they had two practices each on different days.

We lived in a house near my work and the children's school. I would come home at lunchtime to prepare part of our dinner and I would work hard at my job hoping for a promotion... 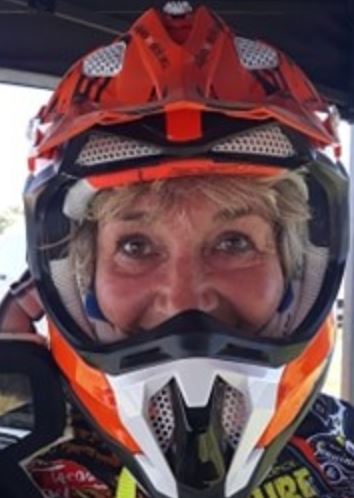 Could you tell us how the disease came into your life? What were the first symptoms?

I started having back pain in May 2006. I put it down to the fact that I had two computer screens at work and was probably sitting awkwardly.

I went to my osteopath in May, June, and July but nothing helped... My upper back hurt around the height of my chest.

I started taking ibuprofen (3-4 a day). My back would burn in the evening, and I had to sleep in a raised position, almost sitting up.

I went to a gastroenterologist who did an endoscopy and colonoscopy. There was nothing special except a sort of rawness or burn in my esophagus due to acid reflux. He then prescribed omeprazole.

After the 3 sessions with the osteopath, he advised me to go and see my primary care doctor and ask him to do a blood test, but we were going on vacation to the south of France, so I decided to go and see him when I got back.

During the vacation I was very tired, and my back still hurt. My husband broke his foot just before we left. So, I had to drive home alone. The pain became unbearable. I took more and more Ibuprofen.

What prompted you to see a doctor? How long did it take for the diagnosis to be made?

When we returned from vacation, I made an appointment with my primary care doctor. He took a blood test in September 2006, 4-5 months after the first pains and the start of my gastro-esophageal reflux.

Three days later, he called to tell me that there had been a mistake at the lab and that he had to take a second blood test. The next morning, I went in and ask him for a copy of the previous results.

It said it was the marker for pancreatic cancer and could not be confused with anything else. I called my doctor, who tried to calm me down while waiting for the second results, which turned out to be the same.

What care did you then receive?

My primary care doctor sent me for an emergency scan, and I was diagnosed with a 4 cm tumor on the head of my pancreas. He suggested that I should be treated by a head professor of oncology at the Saint-Luc University Hospital in Brussels, whom he knew well. However, my mum advised me to go to her surgeon who had operated on her for colon cancer at the Edith Cavell Hospital, which is a private hospital.

So, I went to see him, but he sent me back to Saint-Luc's: they were at the cutting edge for this kind of operation... If the operation was still possible...

You were operated on using the Whipple procedure. Could you tell us about it?

A pancreaticoduodenectomy (or Whipple procedure) is a surgery to treat cancer that involves the head of the pancreas.

During the surgery, the head of the pancreas, part of the stomach and small intestine, as well as the gallbladder and part of the bile ducts are removed. In my case, the tumor had already invaded the celiac vein (heart) and had to be reconstructed by taking a piece of my jugular vein from my neck.

The surgeon removed 98% of my pancreas so it produces a tiny amount of insulin, and I am now a type 2 diabetic.

I was in the hospital for a month without being able to eat or drink. I was fed through a stomach tube, but I was losing several liters of ascites a day through a bag connected to a tube in my stomach.

My surgeon was very concerned and changed my feeding to central feeding and I started to lose less ascites after a few days, and he discharged me after a month. I still had the tube in case.

How did pancreatic cancer impact your personal and professional life at the time?

I was advised to "get my papers together". We didn't tell the children what it was about because we couldn't find the words and they had seen me in the hospital with tubes everywhere and I couldn't tell them that I might not be cured...

The hospital shrink told me the same thing and that there would always be time to tell them when I relapsed. Shortly afterwards I went for chemotherapy. Six months later I was back to work part-time.

What kind of support did you receive from those around you? Were you able to talk about what you were going through openly?

My husband and mother were very supportive, but because we hadn't told the children, we never talked about the disease.

At work, people looked at me like a zoo animal. I had lost about 40 pounds. I was asked to hire someone to help me with my work because I was only back to 50% of my hours, then 75% of my hours after 8 months. It was mainly that they thought I was going to die and that I needed to train someone who could replace me...

You're now in remission, and even cured of pancreatic cancer. How did you experience the post-treatment period?

It was actually very hard to survive this cancer because I had to have a PET scan, a CT scan, and a blood test every 3 months, then every 6 months for 10 years...

Whenever I had the slightest pain, I thought the cancer had returned. I couldn't imagine surviving this cancer which is usually fatal.

All I cared about was getting my life back. My job, my children, learning to eat again with medication, gaining weight and managing my diabetes... nothing else mattered.

After 10 years of "survival", I had my last PET scan. My surgeon told me that I was most likely going to die, like everyone else, but probably not from pancreatic cancer.

That's when I started to live again. I went home and told my husband that I was cured.

When I was young, I used to ride enduro, a form of off-road motorbiking. My husband gave me a dirt bike and I started riding again as if I was still 20 years old! I did training courses and took part in competitions. I finished 3rd in the women's Belgian championship, and I am known as the "Enduro Granny" in Belgium.

I have been interviewed several times and even appeared on TV.

My life has changed completely since then. I was laid off from my job after 19 years of loyal service at the age of 59 (they kept the lady I had trained) and since then I have been enjoying life to the fullest for the last 5 years... 15 years after my operation!

What do you think of patient exchange platforms like Carenity? Are you able to find the advice and support you're looking for?

I think this platform is great. I wish it had existed at the time I was going through my cancer.

I don't look for information anymore, but it's very important for people who are affected by the disease. At the beginning, you want to know everything: which surgeon, which operation, which medication, which medical follow-up, what do you eat, do you have chemo or radiation, etc... but what is most important is to listen to your body and even if I was very lucky, the disease usually shows itself when it is already too late.

I was "lucky" to have the back pain because the tumor was so big that it was pressing on my heart and it hurt, but this is rarely the case.

Finally, what advice would you share with other Carenity members living with pancreatic cancer?

The only thing I can advise is not to waste time doing the things you've set aside to do later, because then it will be too late. I waited 10 years before I started to enjoy life again. The only thing that differentiates a person who has, or has had, cancer is that you think you know what you are going to die of, and you wait for it to come. Other people who are "sentenced" like we are do not think about their death.

Live like it's the last day of your life! This cancer is really bad, but today there is a better chance of survival after the operation than before, so don't hesitate to do the procedure, despite all the post-operative constraints.

Thank you very much for your confidence!

Many thanks to kawacaroline for sharing her story on Carenity!

Cancer and food: advice from a dietitian (1/2)