Living to the fullest with bipolar disorder

Read Neil’s story and get involved in a humorus story of what is like to live with Bipolar Disorder and Depression while being a ‘raving success’.
Battling against ourselves is not an easy task, but it is the one we must do when not everything is going OK. The best way to take this fight is with tenacity and humor, two things that characterize our interviewee, Neil

Hello Neil, could you introduce yourself in a few lines?

Hi, I’m Neil and I have a type one bipolar disorder and I’m glad I can share my experiences of this debilitating illness on a wider platform.

Briefly I’ve survived: five breakdowns, four sections, three different hospitals, two arrests and endured a severe beating by 12 or so military policemen, while handcuffed, when I strayed onto an RAF aerodrome used by the Queen during one of my episodes.  Thank heavens I wasn’t a terrorist! 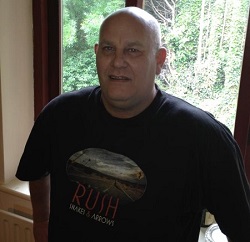 How did you find out you had Bipolar Disorder (Type I) and how did you get your diagnosis? (Was the diagnosis quick or was it difficult to get?)

I made the fatal error of thinking I was well and stopped taking my meds - big mistake.  After a number of psychotic episodes I was sectioned and re-admitted to Claybury Hospital, Woodford Essex. I was so high I didn’t know where I was for 17 days!  I came to find that I had a full beard and wasn’t wearing my own clothes, and the whole situation is still a blank to this day.  I don’t even know what drugs I was given, but I was later informed that because I was so high, they had to bring me down slowly. Gradually I began to take in where I was and why I was there, and then I was informed that I’d been diagnosed with a type one bipolar disorder.

I do recall escaping from the hospital with the wards keys and heading for the local pub!  Later, I was joined by four of the night staff, after they ‘helped’ me into their van, sedated me, and returned me to the ward  Three days later I found I’d had an adverse reaction to the bonus injection I was given. The ward nurse said it was the worst case of Akathisia he had seen in 25 years.  It crippled me for over three months.

How was it like having clinical depression and then finding out that you also had Bipolar Disorder?

Prior to my suicide attempt in 1993 I was drinking heavily and felt like a battery that was running out of power, back then I was sleeping for 17 hours a day and my diet was poor.  The most painful part was being conscious and suffering from the physical pain of depression.  I was then admitted to Claybury for the first time and when the drugs failed to make a difference after a month, I was given six sessions of E.C.T. (Electro Convulsive Therapy) as a last resort.  It worked.  It didn’t cure me, but it took me up to a level where the medication began to take an effect.  I suffered with clinical depression for over two years and everyday was like walking around wearing a lead-lined suit.

When I was then diagnosed as bipolar, I felt as if I was walking around with a target on my back! However, there is a bonus to being bipolar: heightened senses and it is a hell of a buzz I can tell you.  Your reflexes are like lightening, you feel dangerous, and yet I never harmed anyone.

You have formally had BD since 1995, what have been the major impacts of the disease on your everyday life? (The relationship with your family and friends, complications…)

My disorder bankrupted me.  I lost everything I’d worked for at the age of 43, home, car, career, pension and two marriages.  It could make a boy bitter!  My mom was my rock during the worst 12 years of my life.  My sister didn’t have the patience or the understanding of my condition in the beginning, but once she’d read my book that changed. Some long-term friends abandoned me, but I now know that this is their problem not mine.  I have a few good friends, but they don’t live close by. The ones I do have are just the best people, and they include my sons.

How has my illness left me?  Poorer.  I live a largely reclusive life and I’ve been single for the last nine years.  Social life?  What’s that?  My sleep pattern has been totally destroyed, to the point where I have no control when I wake up.  I have problems using public transport which stems back to when I was sedated in hospital.  I was jumped on by four wards and sedated in a narrow corridor, and shortly after I blacked out.  Ever since then I avoid confined spaces with strangers in them.  Once would have been okay, but this happened to me three times.

As for today, how do you manage your life with BD? Do you still take medication or see a therapist? What practical advice could you give to other patients on how to cope with BD?

I eat well and live a day-to-day existence as I can’t say for sure how I will feel the next day. I also have to work my life around my sleep pattern, rather than try to fight it.  If I’m going out in the evening, which is rare, I have to make preparations three days beforehand sleep-wise.  I’m as tired as someone who’s just about to go to bed, all day, so mentally I have to push through that wall to achieve anything.

I have a rough sleep routine but even that throws me a few curve balls.  It is useless to set alarm clocks because I would sleep right through them or get up, have my breakfast and then have to go back to bed for an hour. Then, there are times when I can sleep for 12 hours straight, but then I’m up for 12 hours.  I feel better in the summer months and make sure I catch as much sunlight as I can.

It took four years to find the drugs that worked for me.  I must have taken over 80 different types and had most of the side-effects too, but now I’m stable on Lithium and an anti-depressant called Sertraline.  My last hospital admission was in 2002 and I’ve remained as well as I can for the last 13 years managing my disorder without the intervention of any mental health professionals.

Practical advice is a tenuous area as we don’t all have exactly the same experiences of the disorder despite being placed in the bipolar group.  But, this is what I have learned: don’t be in a rush to recover.  Take the time to get used to your new condition and any drug side-effects.  You spent a long time becoming ill and you do not just have a flu virus, so time-wise, your recovery will have an open-ended time frame.

If you are unhappy with your meds, ask to try something else.  From the outset you’ll feel like no one understands your ‘invisible’ illness or the side effects from the medication, so try and surround yourself with people that do understand you or at least try too.  There are websites you can join and a whole host of mental health groups too.  Lastly, never look at the extensive list of side-effects that come with your meds.  Wait and see how you feel first, then act on it.

The fear is that you’ll never fully recover.  That’s not true.  You may find yourself in different circumstances but with the right professional help and advice, your brain will eventually repair itself.

The first sign of my recovery presented itself when I was able to laugh at my disorder and my new found poverty!  And finally, never think you’re playing ‘the mental health card’ in any situation, you were given that hand at the start of your illness.

You wrote a book about Bipolar Disorder, what inspired you to do it? And what is the message you wish to transmit with it?

I wrote Bi Polar Expedition so I could give something back to the people in the NHS who cared for me when I was in such a desperate and vulnerable position and for patients new to their diagnosis.  It’s funny you know, I still get goose bumps when I re-tell this story… after my second breakdown a very good friend said, “Why don’t you write a book about your experiences, it could help a lot of people.”  Straight away my illness erected a stack of fences.  “My writing was rubbish and so was my punctuation, and anyway, who would be interested in a book about me?”  I sat on the idea for three years.

Three weeks after my fourth breakdown, in 1998 I had a meeting with an Occupational Therapist.  Hilary asked me to write down three things I thought I could do and return with the list the following week.  I went through my options with her and hesitantly mentioned my last idea, fully expecting her to fall on the floor laughing her face off.  I said, I’d like to write a book about my disorder.

At that point, I left her with some notes I’d drafted and darted outside for a cigarette.  Nervously, I returned to hear what she had to say about my ridiculous plan.  She looked up and without blinking said, “Let’s get you published first.”  I couldn’t believe she was taking me seriously, bearing in mind the state I was in.  I wasn’t quite sure what she meant at the time, but she had a plan that literally changed my life overnight.

She referred me to a user-run editorial team called ‘Equilibrium’ which still produces an online mental health newsletter to this day.  There I met the facilitator, a freelance journalist with 20 years of service under her belt.  For the second time I asked a professional what she thought about the idea of writing my book and for the second time I was ready with the oxygen to revive her after such a stupid comment.

I waited for a ‘there-there’ pat on the head but Julia said, “That’s a great idea, strong subject too, have you brought any of your work in with you?”  Well slap me with a "four pound trout," that was the first time I’d heard my ‘scribblings’ described as work.  I had no reason not to write my story.  Julia urged me to take an English language course, for grammar and punctuation and I did.  And in 2001 I past my GCSE exams with "C" and "B’" grades.   That was on a Wednesday in  May of 1999 at 11:45am - and I haven’t put the pen down since.

My life-altering disorder gave me the space and time to define who I am and what my talents are.

Now I’m a raving success, not a raving lunatic.  You don’t have to write a book, but I would encourage you to join a local writing group and write your story down.  Once it is down on paper it’s off your mind and it’s how I managed to cut the loop-tape of loss that I kept re-visiting every waking hour.  I had no control over the losses my disorder presented me with, but the future…

Bipolar disorder: "In my case, my life is completely normal"

Bipolar disorder: “It took me 16 years to be diagnosed!”

"Writing 'In My Bipolar Head' was a real psychoanalysis"