Is breakfast really the most important meal of the day?

Who hasn't heard on countless occasions that breakfast is the most important meal of the day? The idea that this first meal ensures that we have plenty of energy for the entire day has become well ingrained in our minds.

But is breakfast really the most important meal? What makes a 'good' breakfast? What does science say about it? When did the concept of breakfast originate?

When does the concept of breakfast originate?

The concept of breakfast as we know it today was born with a change in eating habits at the turn of the 20th century when Western countries were in the midst of the industrial revolution.

Before this period, people also ate in the morning to break the nightly fast (hence the word 'breakfast'), but it was not ritualized. Indeed, the foods now associated with breakfast were not common. At that time, the leftovers from the previous day were eaten on waking.

At the same time, more and more people were moving from the countryside and fields to the city to take up sedentary jobs (in factories and offices) and workers began to complain of indigestion. Their morning meal was inadequate.

From then on, Dr. John H. Kellogg, an American doctor and inventor who would later found what would become the Kellogg's company, invested in research on "the best possible way of life". He provided wealthy people with treatments ranging from hydrotherapy to light therapy according to the health principles of the Seventh-day Adventist Church. He prescribed bland, low-fat, meat-free diets for his patients. In 1898, for example, Dr. Kellogg created cornflakes, a cornmeal-based flake, which he claimed was a way to combat indigestion. 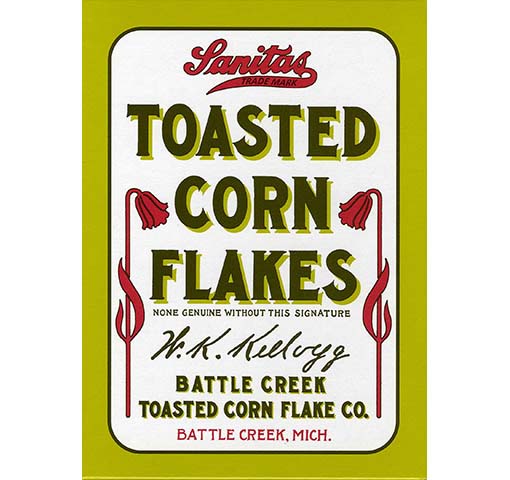 His brother, Will Keith Kellogg, saw great commercial potential and decided to market the cereal to the general public in 1907. Thus the breakfast was born - supported by the theses of nutritionists like John H. Kellogg - and cereals began to invade the market.

What makes a 'good' breakfast?

Many people do not take the time to eat breakfast in the morning. However, it is important to take the time to sit down at the table and allow yourself at least 20 minutes to eat as you would for lunch or dinner.

This is because this first meal will provide the body with the energy it needs to have a good morning.

A balanced breakfast is made up of seasonal foods and can be composed of products from different food categories. You can vary your breakfast pleasures from one day to the next. It can consist of a sugar-free drink (coffee, tea, rooibos, maté, etc.), a protein-rich food (cottage cheese, cheese, soy yogurt, eggs, etc.), a seasonal fruit (kiwi, apricots, bananas, oranges, dried fruit, etc.) and a source of carbohydrates (melba toast, toast, French bread, cereal flakes, etc.) on which it is possible to spread a little butter, jelly or margarine (rich in omega-3s).

If you prefer to start your day with a bowl of cereal, you should pay close attention to the nutritional content of the cereal, as they often contain a lot of sugar and therefore have a high glycemic index.

What are the benefits of breakfast?

It provides the energy needed for the first part of the day:

After a fast of 8 to 12 hours while you sleep, the body needs to replenish its energy to face the first part of the day and thus have the strength to last until lunchtime.

It promotes memory and concentration:

During the night, the level of glucose in the blood tends to fall and some of our organs, such as the brain (which is fuelled by glucose), then function less well when we wake up. A good breakfast allows us to be more productive in the morning.

The risk of nutritional deficiencies is lower:

Breakfast gives the body all the essential nutrients it needs to function properly. People who skip this meal are more likely to suffer from deficiencies in the long term.

People who do not eat breakfast tend to feel hungry mid-morning. Since they are often not at home, they tend to nibble and snack on less balanced foods such as biscuits or pastries, which are high in sugar and fat.

What does science say about breakfast?

As we saw earlier, the belief that breakfast is the most important meal of the day is well established in Western society. However, there is little scientific evidence to support this.

Overall, people who eat breakfast tend to be thinner and healthier. However, these individuals often also eat a more balanced diet and get more exercise.

Two studies published in 2014 in a leading journal, the American Journal of Clinical Nutrition, have reopened the debate on the true value of breakfast.

These studies call into question the fact that eating breakfast would prevent people from becoming overweight. The scientists stress the importance of many factors that were not sufficiently taken into account in previous studies, such as physical activity or socio-economic background, of which breakfast is a marker.

Indeed, since the 1950s, products from the food industry (such as cereals which are often high in sugar) have become part of our diet.

Thus, according to Professor Bernard Guy-Grand, in the French Journal of Nutrition and Dietetics (Cahiers de nutrition et de diététique): "We are obviously not opposed to breakfast, which has its advantages for most consumers of all ages, but there is no reason to make it an absolute obligation for all in the hope of fighting obesity...".

In his view, the only thing that is certain is that breakfast gives us the boost of energy we need to get the day off to a good start.

Was this article helpful to you? Are you a "breakfast person"?
Share your thoughts and questions with the community in the comments below!
Take care!

For years I never ate breakfast, but after my diagnosis I began eating breakfast. A balanced breakfast gives me energy and stamina to attack my day head on👍

Technically breakfast is the first meal you eat after waking up from a night's sleep (or a day's sleep if you work nights). For instance, it can be anything from traditional breakfast food like cereal or bacon and eggs, or it can be whatever left-overs you have in the fridge such as pizza or fried chicken. Personally, I'm a proponent of the left-overs but if there are none I go for the bacon and eggs with toast. Then there are some people who consider a balanced breakfast to be a donut in each hand. The body needs fuel and even unhealthy fuel can give a person energy, at least for the short-term, but that quite often leads to snacking between meals and those snacks very seldom consist of healthy foods - they're more likely to consist of chips, candy, ice cream . . .