You may have heard that breakfast is "the most important meal of the day," and a new study helps to support this. 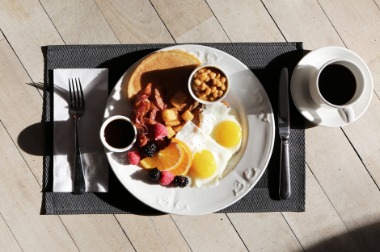 It found that eating a big breakfast and reducing lunch and dinner size may be key for people looking to lose weight and improve their blood glucose levels.

Researchers suggest that three meals per day — starting with a big breakfast — could promote weight loss and better glucose control. Led by researchers from Tel Aviv University in Israel, the study found that adults who were obese and had type 2 diabetes lost more weight and had better blood glucose levels after 3 months when they had a high-energy breakfast every day.

Lead study author Dr. Daniela Jakubowicz, who is a professor of medicine at Tel Aviv University, and colleagues recently presented their resultsat ENDO 2018, the annual meeting of the Endocrine Society, held in Chicago, IL.

Obesity is a leading risk factor for type 2 diabetes; excess weight makes it more difficult for the body to use insulin — the hormone that regulates blood glucose levels — effectively.

According to the Obesity Society, it is estimated that around 90 percent of adults who have type 2 diabetes are overweight or obese.

In terms of treating obesity and type 2 diabetes, switching to a more healthful diet is often the first port of call. But, as Dr. Jakubowicz notes, it's not always what and how much we eat that might cause problems; it's also the time of day at which we eat.

With this in mind, Dr. Jakubowicz and colleagues sought to find out more about how the timing of food intake influences weight loss and blood glucose levels.

The scientists enrolled 29 adults, of whom 18 were male and 11 were female, to their study. Subjects were aged 69, on average, and all of them had obesity and type 2 diabetes.

The team randomly assigned each of the adults to two different diet groups for a total of 3 months.

The researchers found that subjects in the Bdiet group lost an average of 5 kilograms after 3 months, while those who followed the 6Mdiet gained an average of 1.4 kilograms.

Hunger and cravings for carbohydrates also increased among subjects in the 6Mdiet group, but these reduced significantly for subjects who followed the Bdiet.

The effects on blood glucose levels

Mean glucose levels during sleep did not reduce at all for those subjects who followed the 6Mdiet diet, but subjects in the Bdiet group experienced a reduction of 24 mg/dl — from 131 mg/dl to 107 mg/dl — at 3 months.

Those who adhered to the Bdiet also required less insulin during the study period, with a reduction in 20.5 units each day. Subjects who followed the 6Mdiet diet, however, needed more insulin, with an increase of 2.2 units every day.

Meal timing offers benefits in itself

Notably, the study also revealed that participants adhering to the Bdiet experienced a significant decrease in overall blood sugar levels in as little as 14 days, even when the subjects themselves showed no weight loss.

According to the researchers, this finding indicates that the timing of meals itself can help with blood glucose management, though weight loss can help to enhance the benefits.

Overall, the team concludes that three meals each day — with breakfast being the biggest — may be of great benefit to people with obesity and type 2 diabetes.

"This study shows," says Dr. Jakubowicz, "that, in obese, insulin-treated type 2 diabetes patients, a diet with three meals per day, consisting of a big breakfast, average lunch, and small dinner, had many rapid and positive effects compared to the traditional diet with six small meals evenly distributed throughout the day."

"A diet with adequate meal timing and frequency has a pivotal role in glucose control and weight loss."