Since the appearance of SARS-Cov2, the virus that causes COVID-19, social distancing measures have been put in place to avoid transmission and stop the spread of the coronavirus. How does an epidemic spread? What is the purpose of containment measures? We tell you everything and encourage you to stay home!

What is an epidemic?

An epidemic is the outbreak and spread of a contagious infectious disease that strikes a large number of people at the same time and in the same place.
Today, the word "epidemic" extends to phenomena that are not necessarily infectious. This is the case, for example, when we speak of the "obesity epidemic".

According to the World Health Organization (WHO), a pandemic is an epidemic that affects a large number of people in a very large geographical area.

Since March 11, 2020, COVID-19 is considered a pandemic because it affects 155 countries (out of 198 recognized by the UN). Calling the COVID-19 epidemic a pandemic does not mean that the virus has become more deadly, it is simply a recognition of its global spread.

What are the mechanisms for the spread of an epidemic?

The spread of an infectious agent within a population is a dynamic phenomenon: the number of healthy and sick individuals evolves over time depending on the amount of contact between the two groups, allowing the agent to pass from an infected individual to a healthy non-immune individual.

The general transmission mechanism of an epidemic is made up of three  elements:

The vector is the living organism that transmits the pathogen/infective agent from one individual to another in its environment.

If you’d like to learn more about the spread mechanism of the COVID-19 epidemic we invite you to read our article: “Coronavirus: What do you need to know?”

What are the strategies used to contain an epidemic?

In the face of an epidemic, different strategies are used to decrease contamination among the population:

Conversly, social distancing is less effective in cases where the infection is transmitted primarily through contaminated food or water or by vectors such as mosquitoes.

In the case of the COVID-19 epidemic, why does social distancing play such an important role?

The coronavirus is transmitted through respiratory droplets, so any close contact (unwashed hands, contact within three feet) with a sick person carries a risk of contamination. Furthermore, coronaviruses seem to survive for several hours (8 to 12 hours) in the outside environment on inert surfaces (door handles, tables, elevator buttons, etc.).

For the epidemic to regress, it is necessary to reduce exposure by adopting social distancing measures. This method has already proved successful during the "Spanish" flu of 1918, which claimed more victims than the First World War.

Epidemiologists fear that an "explosion" of contaminations will generate more cases than the health system can handle; in this situation, patients could die due to the lack of care because of the lack of available beds. Bearing in mind that COVID-19 is generally benign, especially in children and young adults, it can also be serious: 1 in 5 patients needs to be hospitalized. It is therefore essential to respect social distancing measures if we want to stop the spread of the virus. 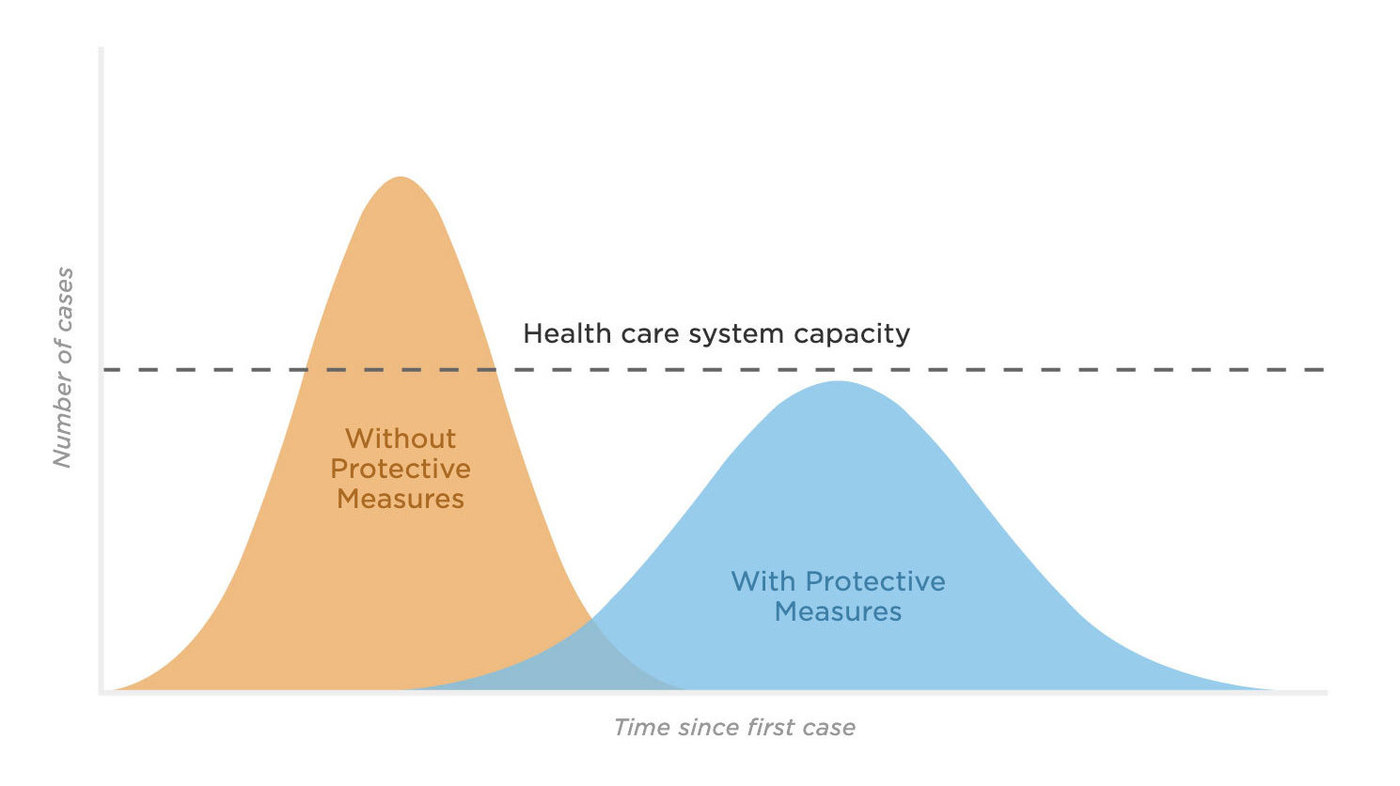 In addition, a team of INSERM (the French National Institute of Health and Medical Research) epidemiologists published a study on March 14th that indicated that eight weeks of school closures and 25% home-working would be enough to delay the epidemic's peak by two months and reduce the number of cases by 40% at the height of the epidemic.

Why is it important to comply with containment measures even if you have no symptoms?

COVID-19 can manifest itself in very different ways from one individual to another. The illness can resemble a seasonal cold or flu (cough, fever, runny nose) as well as a severe respiratory infection like pneumonia or SARS (Severe Acute Respiratory Syndrome). But it can also be asymptomatic (presence of the virus in the body without symptoms or clinical signs of infection). These asymptomatic individuals are called healthy carriers. Even if they do not have symptoms, healthy carriers remain contagious and can spread the disease to others.

With or without symptoms, a person contaminated with COVID-19 can transmit the pathogen to an average of 2 or 3 people. In addition, the time between infection and the onset of symptoms (incubation period) is 3 to 5 days in most cases, but can be as long as 14 days. This means that an infected person can transmit the disease up to 2 weeks before the onset of symptoms. Under these conditions, it is understandable why it is important to comply with containment measures even if there are no symptoms. 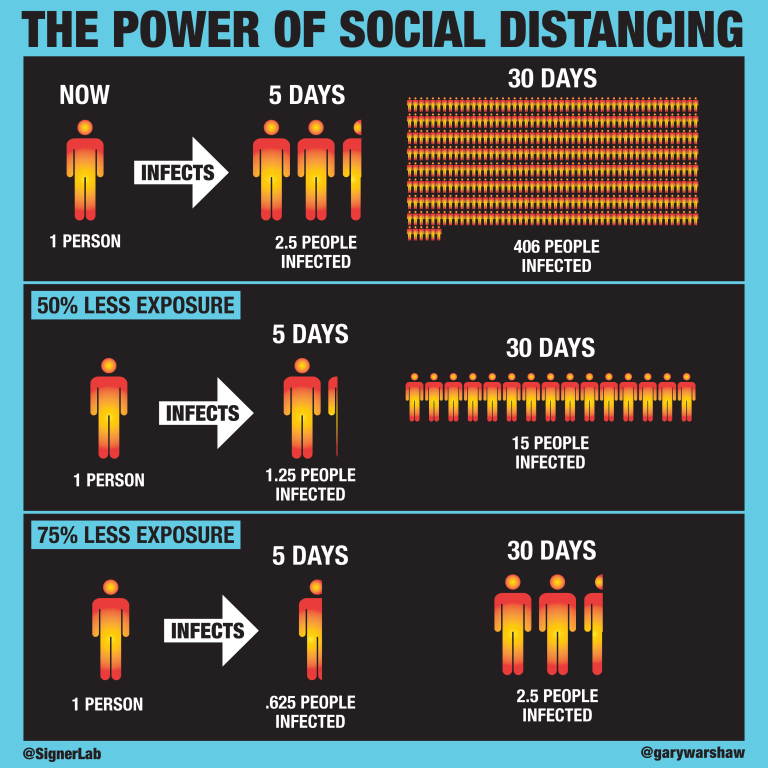 What are the social distancing measures imposed by the government on Tuesday, March 24?

These measures will last for two weeks from March 16, at which point the government and CDC will reexamine the situation and evaluate if they may be lifted or extended.

The following states have implemented stay-at-home orders as of Tuesday, March 24:

For more information, check your state or local government's websites.

What do I risk if I do not respect social distancing measures?

Every citizen is advised to comply with these new measures. Though the federal government has not issued specified guidelines regarding enforcement of social distancing measures, depending on your location, state or local law enforcement may have the power to issue citations or disperse gatherings where people do not comply. Check with your local government to find out more. It is also important to remember, that by not respecting social distancing strategies, you are putting not only yourself at risk of infection but your loved ones too.

While social distancing measures are effective, containment can have a significant impact on the state of stress and psychological well-being of the population. What do you do to feel less isolated? What advice do you have to help you cope better during this period of confinement? Let's share our tips in comments! 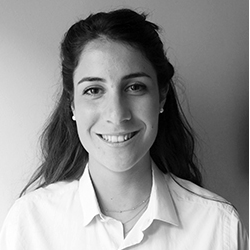 Pauline Heyries is currently a Data Scientist Intern at Carenity. Her role consists of drafting the survey questionnaires offered to patients, analyzing the collected data and contributing to the writing and... >> Learn more

How to participate in this research project?