Brain damage from heading a football may be five times more extensive in women than men, said a US study Tuesday based on nearly 100 amateur players. 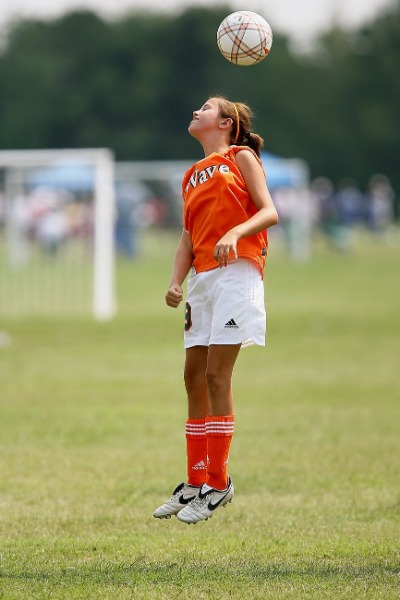 The report in the journal Radiology suggested that sex-specific guidelines may be needed to guard against head injuries in football, or soccer as it is widely called in the United States. "Researchers and clinicians have long noticed that women fare worse following head injury than men, but some have said that's only because women are more willing to report symptoms," said lead author Michael Lipton, professor of radiology, psychiatry and behavioral sciences at Albert Einstein
College of Medicine.

"Based on our study, which measured objective changes in brain tissue rather than self-reported symptoms, women do seem more likely than men to suffer brain trauma from heading soccer balls."

For the study, 49 male and 49 female players were given a form of MRI called diffusion tensor imaging (DTI), which analyzes the health of the brain's white matter by looking at water balance in the tissue. Players' ages ranged from 18-50, and both groups reported a similar number of headings over the previous year. Men reported an average of 487 headings
and women 469.

The scans showed that "the volume of damaged white matter in women soccer players was five times greater than for male players," according to the report. The women had eight brain regions where white matter -- which involves communication between different parts of the brain -- were affected, compared to three in men. Researchers said the brain changes were "subclinical," meaning the players did not report any altered thinking ability. But the changes remain a concern because they could be a precursor to further injury and brain damage, including cognitive decline and behavioral changes.

"Before serious dysfunction occurs, it's wise to identify risk factors for cumulative brain injury -- such as heading if you're female -- so that people can act to prevent further damage and maximize recovery," said Lipton.

The study gave no formal reasons for the differences, but some experts suggest that neck strength, sex hormones or genetics could be to blame. About 30 million women and girls play soccer worldwide, according to the International Federation of Association Football, known as FIFA.