1 In 7 Zika Babies Born With Defects In US Territories

About one in seven babies who were exposed to the Zika virus in the womb have at least one developmental defect a year later, said a US study Tuesday. 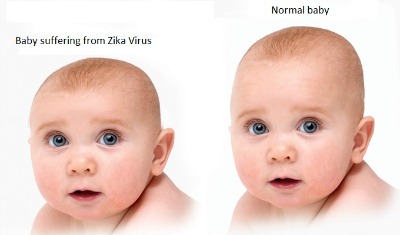 The rate of abnormalities -- about 14 percent -- represents more than 30 times the level expected in infants that were not exposed to the mosquito-borne virus, officials with the US Centers for Disease Control and Prevention said. Health problems included small head size -- known as microcephaly -- brain or eye damage, seizures, and developmental delays, said the CDC Vital Signs report, the largest study to date on outcomes of babies born to mothers who were infected with Zika during pregnancy.

"Some of these problems were not apparent at birth and were identified as the babies grew older," said the report, which included more than 4,800 pregnancies that had positive lab tests for Zika in the US territories of American Samoa, Micronesia, Puerto Rico, Marshall Islands, and US Virgin Islands from 2016-2018. The report focused on the US territories, which were hardest hit by the outbreak, and did not include US mainland cases. "From these pregnancies, 1,450 babies were at least one year old and had some follow-up care reported for this analysis," it said.

A total of 203 "had a Zika-associated birth defect, neurodevelopmental abnormality possibly associated with congenital Zika virus infection identified, or both." The rate of Zika-related birth defects is on par with prior studies in Brazil and other areas that were hard hit by Zika, said Peggy Honein, director of CDC's Division of Congenital and Developmental Disorders. "We have pretty consistently seen five to 10 percent of the babies from pregnancies with Zika having one of these brain or eye defects, or microcephaly," she told reporters on a conference call.

"There have been some reports that have used different criteria and have included a broader range of outcomes, including some findings on MRI imaging of unknown clinical significance and if you use broader criteria you will see more babies affected," she added. "We think there isn't a geographic difference but more of a case-criteria
difference."

There have been 74 cases of Zika so far this year in the US territories, almost all in Puerto Rico, said Lyle Pedersen, director of CDC's Division of Vector Borne Infectious Diseases.

"There is ongoing transmission in Puerto Rico, but it is at a much lower level than obviously we have seen in previous years," he said. A massive outbreak of Zika swept Latin America and the Caribbean beginning in 2015, eventually reaching 86 countries in the Americas and Africa. The last known case of local transmission of Zika on the US mainland was in 2017, with two cases in Florida and five in Texas, officials said.

Zika can cause a rash, headaches and muscle aches but is particularly dangerous to pregnant women because it has been proven to cause birth defects, including structural damage to the fetus's brain, eyes and nervous system. The virus can be spread by mosquitoes and also by sexual contact. Women who are pregnant are urged to stay away from areas where Zika
transmission is ongoing, and men who have been exposed are advised to wait three months before attempting to conceive with a partner.

"The Zika story is not yet over. We are still learning more every day about the full impact of these infections," said Honein.