Which Airport Surfaces Carry The Most Viruses? 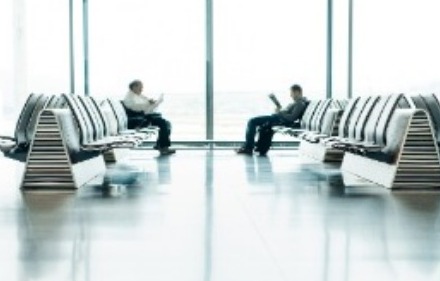 Most of the time, the common cold or flu are not life-threatening conditions.

However, they cost the United States economy a great deal of money, in addition to being an unpleasant inconvenience. According to recent estimates, flu costs the U.S. over $10 billion each year in hospitalization and outpatient visits. Workers lose an additional $6.2 billion per year in wages because of "lost productivity."

The Centers for Disease Control and Prevention (CDC) deemed the 2018–2019 cold and flu season "particularly difficult," and they urge the public to take preventive measures, such as getting the flu shot and being mindful of spreading microbes.

In crowded spaces, however — such as on the subway or an airplane — staying away from germs can be challenging. New research helps us avoid the highest-risk areas by screening some of the most widely used surfaces in airports.

Researchers from the University of Nottingham in the United Kingdom — together with the Finnish National Institute for Health and Welfare in Helsinki — wanted to find out which airport surfaces harbored the highest number of respiratory viruses.

Niina Ikonen, a virology expert at the Finnish National Institute for Health and Welfare, is the first author of the paper, which was published in the journal BMC Infectious Diseases.

Ikonen and team collected "surface and air samples" from Helsinki-Vantaa airport during the peak of the 2015–2016 flu season in Finland.

The surfaces were from several places along the passenger pathways in Helsinki-Vantaa, which is the main airport in Finland, registering almost 20 million passengers during 2017.

Some of the surfaces that the scientists examined included: armrests, escalator and stair handrails, toys in the children's play area, trolley handles, luggage trays at the security checkpoint, toilet lids, locks, and flushing buttons.

The researchers then tested the swabs taken from these samples for "influenza A and B viruses,respiratory syncytial virus, adenovirus, rhinovirus, and coronaviruses."

The tests revealed that viruses were present on 10 percent of the surfaces examined. The plastic security trays were found to have the highest concentration of viruses.

Of all the viruses examined, the rhinovirus — the culprit for the common cold — was the most widespread. The researchers also found the influenza A virus.

However, no respiratory viruses were found on any of the toilet surfaces tested.

The team hopes that the findings will help the public better prepare for the upcoming flu season. The study is part of a wider project called PANDHUB, which is an endeavor funded by the European Union that focuses on the role of major traffic hubs in spreading infections.

Study co-author Jonathan Van Tam, who is a professor of health protection from the University of Nottingham, comments on the findings. "This study supports the case for improved public awareness of how viral infections spread," he says.

"People can help to minimize contagion," he adds, "by hygienic hand washing and coughing into a handkerchief, tissue, or sleeve at all times but especially in public places."

"These simple precautions can help prevent pandemics and are most important in crowded areas like airports that have a high volume of people traveling to and from many different parts of the world," adds Prof. Van Tam.

Ikonen also weighs in, saying, "The presence of microbes in the environment of an airport has not been investigated previously."