What are the first signs of lung cancer?

What are the first signs of lung cancer? How can we be alert to these signs? What are your risks? How can you get tested?

15 to 20% of people affected by lung cancer have never smoked! More than 2/3 of lung cancers are diagnosed at a metastatic stage (stage where the cancer cells have already migrated to other organs). Lung cancer is more devastating than the other three most common and deadliest cancers combined (colorectal, breast and pancreatic cancers). This is why we need to talk about it!

The very first signs of lung cancer may not be very obvious and may even go unnoticed. It is important not to overlook any unusual changes and to keep an eye on your health. Some symptoms may also be the result of conditions other than lung cancer, and their presence does not necessarily indicate lung cancer.

What are the general symptoms of cancer?

In the case of cancer in general, signs of deterioration of the general state of health can appear, in particular: intense fatigue, headaches, unexplained, significant and rapid weight loss, generalized weakness, loss of appetite, profuse night sweats. Unexplained bone pain may be due to bone metastases.

What are the symptoms specific to lung cancer?

More specifically for lung cancer, certain respiratory symptoms are telling: difficulty breathing (may be linked to the presence of water between the two layers of the pleura), a persistent and worsening cough, shortness of breath, wheezing, blood in the sputum (hemoptysis) which should be reported promptly to a doctor, raspy or hoarse voice (dysphonia), persistent chest pain which becomes more marked when breathing, difficulty swallowing (dysphagia due to compression of the esophagus). Lung problems are more frequent; bacterial or viral bronchitis or pneumonia may occur repeatedly. In addition, symptoms of Horner's syndrome may appear, such as weakness or drooping of one eyelid, which is less frequent but often indicative of lung cancer.

Is there any visible swelling?

Under normal conditions, swollen lymph nodes above the clavicle and in the neck often indicate a localized infection. Sometimes this is a sign of lung cancer, especially if these nodes are not tender or mobile and have significantly increased in size. You should not be alarmed too prematurely, but you should monitor their size.

There are two main types of lung cancer depending on the type of cell in which the cancer started. And the treatment for lung cancer is determined by the type of lung cancer the patient has. For example, for non-small-cell lung carcinomas (NSCLC), which are differentiated according to the genetic alteration of the tumor, therapeutic solutions range from surgical removal to chemotherapy, radiotherapy, or even immunotherapy (if the tumor is due to an identified genetic mutation). For small-cell lung carcinomas, two-thirds of cases are diagnosed as metastatic (late) and are treated by chemotherapy and immunotherapy. 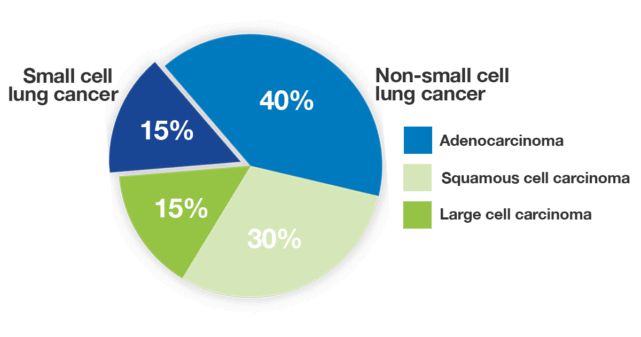 Lung cancer is most frequently diagnosed among people aged 65-74 and affects more men than women: approximately 51% of cases occur in men, versus 49% of cases in women (in 2020, out of about 228,820 cases). The prevalence of lung cancer in women is continuing to rise while it declines in men, likely due to lifestyle changes (including increase in smoking) in women since the mid-to-late 20th century. 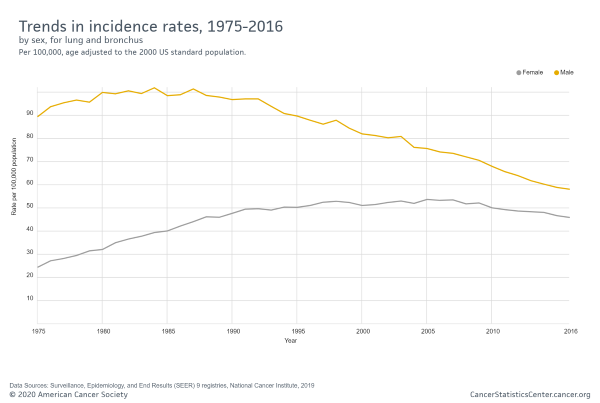 What are my risks?

Clearly, smoking is the number one risk factor for developing lung cancer. Frequently, occupational exposure to certain chemical or other substances is implicated: one example is asbestos, whose exposure is correlated with the development of pleural mesothelioma (cancer of the pleura, now considered an occupational disease and subject to compensation). It should be noted that a smoker exposed to asbestos has 50 times more risk of developing lung cancer than a non-smoker who is not exposed. Other substances have been recognized as "lung carcinogens" and are often found at low levels in the workplace: arsenic, nickel, chromium, mustard gas, cadmium, ethylbenzene and lead. It is important for any patient diagnosed with lung cancer to look for and report exposure to a carcinogenic substance in the workplace. Indeed, there is compensation for certain cases, for example, the treatment may fall under the category "occupational illness / work-related lung disease"

High exposure to outdoor air pollution or radon for example (a radioactive gas strongly present in certain rocks and soils) has also been identified as suspected or proven carcinogens. Here are some "known" carcinogens as defined by the WHO's International Agency for Research on Cancer.

Unfortunately, there is no logic to the occurrence of cancers; a smoker exposed to asbestos may never develop lung cancer.

How do I get tested?

It is important, especially for people at risk (due to smoking, age, etc.), to remain vigilant with regard to the warning signs, but above all, to carry out the health check-ups recommended by your doctor (individual screening). In the case of cancer, collective screening campaigns target subjects at risk and for whom close monitoring is advisable. For example, a pap smear every three years is recommended for all women aged 25 or older in order to prevent cervical cancer, or a screening test for colorectal cancer should be carried out for all men and women between the ages of 50 and 74.

In the case of lung cancer, an annual check-up is recommended for smokers and depending on the clinical examination, the doctor may refer the patient for further tests with a specialist (pulmonologist or ENT).

As for the diagnosis of lung cancer, it is based on a battery of clinical and radiographic examinations, but is definitively made following an anatomo-pathological examination (biopsy or study of the affected tissues).

A team of researchers from the University of Crete have developed a Lung Cancer Risk Calculator, an online tool that can help to calculate your risk of developing lung cancer. To take the test, you need to enter basic information such as age, how long you have smoked, how many cigarettes you smoke per day on average, etc. While the test is in no means a replacement for a medical examination or physician’s advice, diagnosis or treatment, it can give you an idea of your potential risk for the disease.

Was this article helpful to you?
Feel free to share your thoughts and questions with the community in the comments below!
Take care!

Lung cancer: What are the latest advances in research?

What are the different types of lung cancer? How are they diagnosed and treated?

What symptoms did you or your loved one experience before diagnosis?

COVID-19 and lung cancer: How are you holding up?

What is your lung cancer diagnosis story?

I am scared - my mother was just diagnosed with lung cancer

Do or did you smoke before/after diagnosis?

Surgery for lung cancer: What to expect?

Lung cancer: What do you think of your care journey?

Do these results means I have cancer?

How to cope with lung cancer?