Major depressive disorder affects people of all ages. It affects approximately 15 to 20% of the general population, over the course of a lifetime. It is presented as a succession of characterized depressive episodes, resulting in numerous symptoms - including pathological sadness, loss of pleasure and cognitive symptoms - with major repercussions on the life of the patient and his or her loved ones.

How to recognize the first signs of depression? What are the triggers? How can it be treated?

We conducted a survey of 175 members in France, the United States and the United Kingdom.

Find out what Carenity members had to say about their experience of depression in the article below!

175 members took part in our survey in France, the UK and the US

We conducted a survey from July 7 to 20 in which 175 members of the Carenity community with depression in France, the United Kingdom and the United States participated.

90% of these members have been officially diagnosed with depression and 2% are awaiting diagnosis.

More than half of the respondents (54%) have been affected by depression for over 10 years. 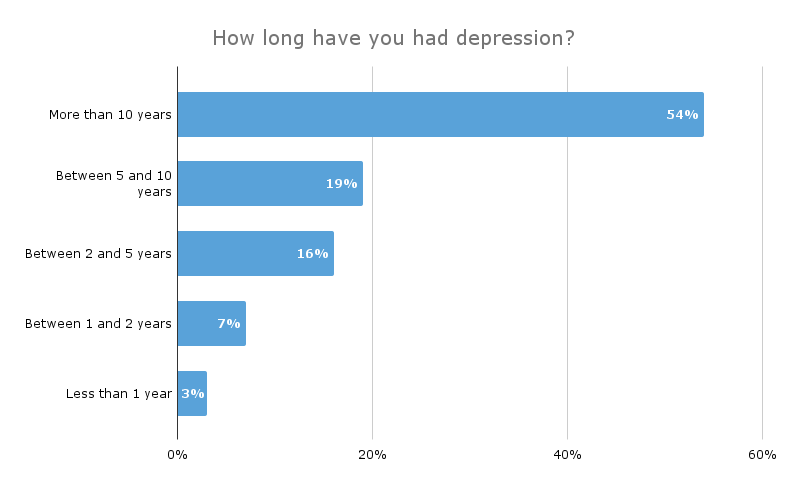 For 37% of respondents, their depression has its roots in relationship problems

The causes of depression can be diverse and varied.

According to the members who responded to our survey, their depression was triggered by the following factors: 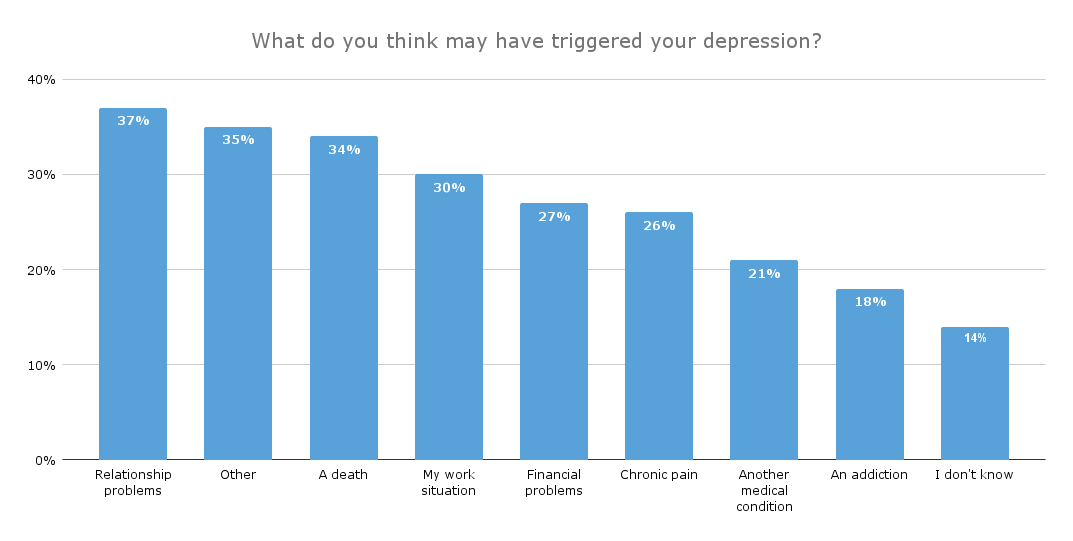 Among the members who responded "Other", they mentioned:

62% of respondents are being treated for their depression

The vast majority of survey respondents are taking medication. 37% of them are seeing psychiatrist and 22% a psychologist. Only 3% have tried hypnosis to treat their depression. 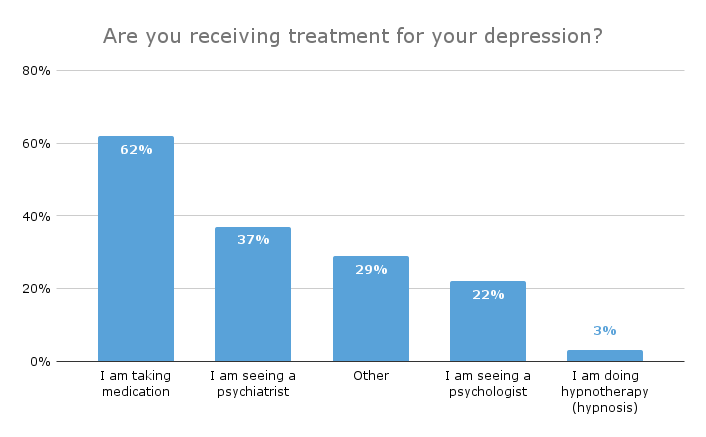 Of the members who responded "Other", they indicated that they are trying:

33% of the respondents are taking medication and are being seen by a psychologist or psychotherapist.

72% of those taking medication indicated that they are on anti-depressants and 28% are taking anxiolytics (anti-anxiety drugs).

Depression has a major impact on Carenity members' daily lives

Carenity members affected by depression have seen their daily lives turned upside down.

Indeed, the consequences are significant: 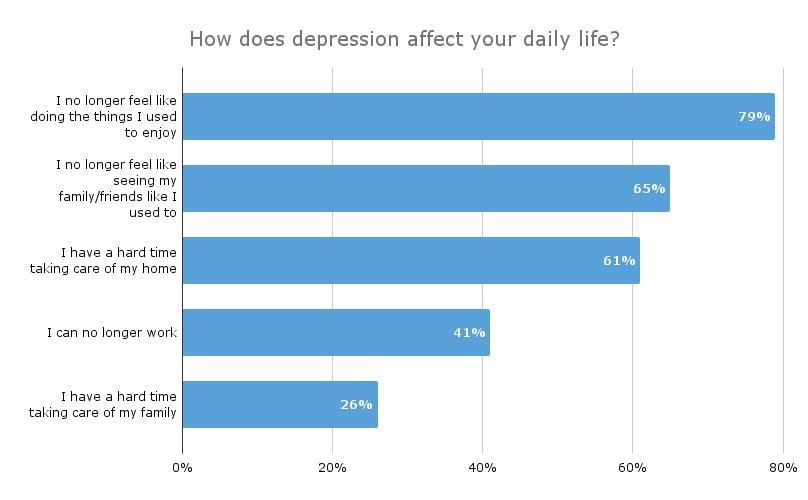 78% of members indicated that they no longer feel like doing the things they used to enjoy before they developed depression.

When asked, “At what point did you realize that it wasn't just a period of low mood but actually depression?”

"When I didn't bother eating or showering and it felt like that was okay."

"When I realized that I was using alcohol as a coping mechanism."

"When I no longer felt like I could handle it on my own."

"When pressure kept mounting and it felt like there was no way out of the valley."

"When I had the thoughts that it was always going to be like this and that it wasn't going to improve how it had before."

"When the thoughts of self-harm came into it."

"After suffering for 18 years, my mom suggested I see a doctor. I had never thought there was anything I could do about it before."

“It was in reading all the articles on depression and realizing that I had exactly what they described. It ruins your life socially, physically and psychologically.”

“The day where I realized that I had lost any kind of pleasure I had in doing the things I used to enjoy.”

“When I started studying psychology in college and I realized that my feelings and symptoms of apathy had a name.”

"When every day I would wake up wishing I hadn't. When everything was a constant struggle to get through."

"When I couldn't sleep, eat or basically function, all I could do was cry."

There are several steps to moving forward and potentially overcoming depression:

Break out of denial

Depression should be an opportunity to look back at your personal journey and to take care of yourself. But above all, it is necessary to break out of any denial and accept that you aren't okay and that you want to get to a better place mentally.

According to Dr. Etienne Payen, a medical doctor, general practitioner and psychotherapist specializing in depression, and his theory of "positive depression", doing everything possible to silence our pain is equivalent to ignoring the messages that our bodies and mind are trying to send us.

It is important to get into therapy and talk to someone, in order to understand where your depression stems from. By letting yourself speak, it can help you to realize that it is time to let go of the weight you are carrying and give meaning to what you are going through.

According to Dr. Payen, depression can and should be a driving force for a shift in mindset.

Depression is often a sign that something is not going right or serving you well. It is therefore important to break certain harmful habits and adopt new ones.

Dr. Payen, believes that it is essential to take a step back and reflect on our past in order to change certain ways of thinking and reacting. And, through this, learn to say "no" - not only to others, but especially to oneself. From there, we can re-examine our past experiences, mistakes, and defense mechanisms.

Once awareness has been gained and an analysis made of the things that need to be changed through therapy, it will then be possible to change one's thinking patterns. With time, therapy allows us to overcome the depressive state to find new balance.

According to Dr. Payen, depression can be beneficial in that it can lead to the establishment of a new way of living and thinking.

Depression, although not an opportunity in itself, can be an opportunity to heal past wounds in a lasting way and to move forward more freely and maturely.

What is empty nest syndrome?